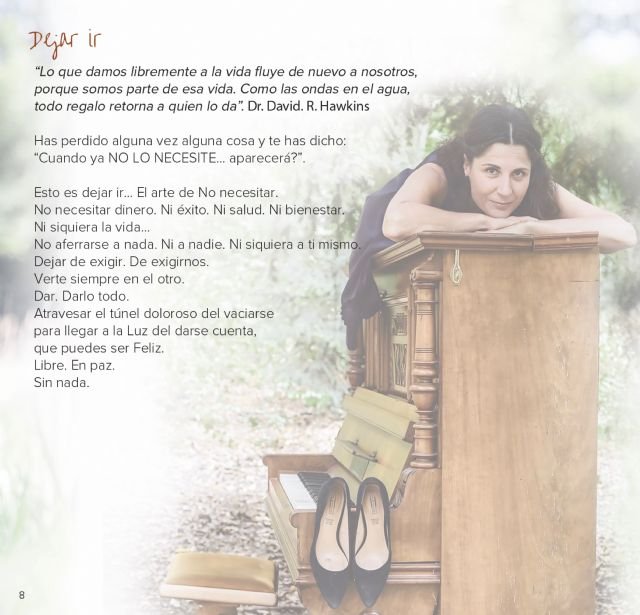 Source: Agencies
On Saturday, December 15, the new album by the Yeclavian artist living in Germany, Conchi Muna, will be released.
After her debut feature Women who are published in 2015, Deja ir-Loslassen was born, the second job in her professional career as a composer and soloist pianist. Twelve piano compositions only with its peculiar style pleasant and easy to listen to all ears, which takes ingredients of classical music, improvisation, jazz, French Chanson, tango and other rhythms of our broad Spanish folklore as the bulería that shapes its theme «27». But this CD is not just music. Inspired in the book Let go. The way of the delivery of Dr. David Hawkins, the album consists of a libretto in two languages, Spanish and German, with twelve poems, also written by her, united intimately to each musical theme. The result is a set in which music and poetry intertwine giving rise to an inner journey of deep artistic, philosophical and spiritual content.

Let go is my second album that is born at the end of the fall of 2018. Again solo piano, but this time full of my compositions. A deep and intense work with the composer and pianist that I am and, and above all, with the woman I am. With this walking being in this infinite wheel that is life. And it seems that everything that one creates out, is working and polishing inside.

The concert official presentation of the CD will take place on February 16, 2019 in Braunschweig, Germany. Starting in March, the start of their new concert tour in Spain and Germany is scheduled.

Conchi Muna was born in Yecla, on January 27, 1975. For ten years she has lived in Germany with her husband and two children. A brilliant student, she studied piano at the Superior Conservatory of Murcia. During her stay in Spain she was a piano teacher and piano accompanist in different Conservatories such as Murcia, Albacete or Cuenca among others, teaching work that she continues to practice now in Germany and which she combines with her artistic career.

. Music is for me much more than musical notes. Much more than everything learned at the Conservatory. Much more than those fingers that move at full speed. Music is that magical language that we all understand. That connects us all. The best emotional therapy. My desire is that stroking keys arises a music that caresses souls. And that those caresses transform us and make us responsible people. Happy New

The album will be available from December 15 at the Friends of Music Association of Yecla, Natusyl Herbalist or online at its website: conchimuna.es