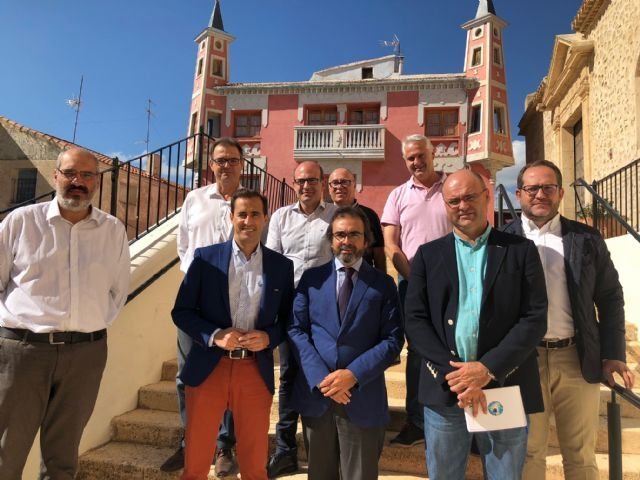 The counselor of the Presidency meets in Ulea with the mayors of the town councils and underlines the treatment they receive «so that the neighbors enjoy equal opportunities»
The Community will deepen in the attention to the municipalities of less than 5,000 inhabitants, because «they deserve a singular treatment in consonance with the singularity that they present by reason of their population». To this end, a broader framework for collaboration will be established, as indicated by the Minister of the Presidency, Pedro Rivera, in the meeting he held today in Ulea with representatives of these municipalities.

Rivera stressed that «it is necessary to give unequal treatment differently, so that the distances are shortened and we can approach the ideal of equal opportunities, as understood by the regional government, and therefore the means are put in place for those who due to their scarce population, they can collect less resources that are duly compensated. »

Therefore, the regional government «wants to lay the foundations for the future strategic development of small municipalities, considering their particularities, analyzing and valuing their potential, reversing their weaknesses in opportunities.» In short, making the little ones bigger, «he stressed. .

Among the actions to compensate municipalities with less than 5,000 inhabitants is the Municipal Cooperation Plan, which has a Financing Fund exclusively for local corporations under 5,000 inhabitants. It is endowed with 1.2 million euros and in the current year it has increased by 33 percent.

Also the financing of one hundred percent of the quotas that the eight municipalities contribute to the Fire and Rescue Extinction Consortium, in accordance with the commitment assumed by the president of the Community in the Council of Mayors held on June 6, 2017. With this, the councils are released from the contribution, 123,000 euros per year in total, to which they are committed the current statutes by which the Consortium governs which form 43 of the 45 municipalities and the Community.

Rivera also cited the Works and Services Plan «for what it represents for the 41 municipalities that receive it and especially for those who have less possibilities to undertake the necessary investments alone to improve the welfare of their population.»

This will allow, in its current multi-year configuration, which encompasses the 2018 and 2019 years, a «longer term planning, as well as undertaking larger works». The investment for these eight municipalities will reach 1.2 million euros.

The counselor highlighted the work of the regional government «so that citizens have the same opportunities without prejudice to the municipality where they live, because contributing to the financing of these municipalities is guaranteed the provision of basic and essential services and remedy to the equipment and infrastructure deficit. » Finally, he called for «better regional financing, which will result in greater local financing and greater citizen welfare.»