The arrested, 53 and 49 years, developed their criminal activity in areas not well traveled, to avoid being surprised 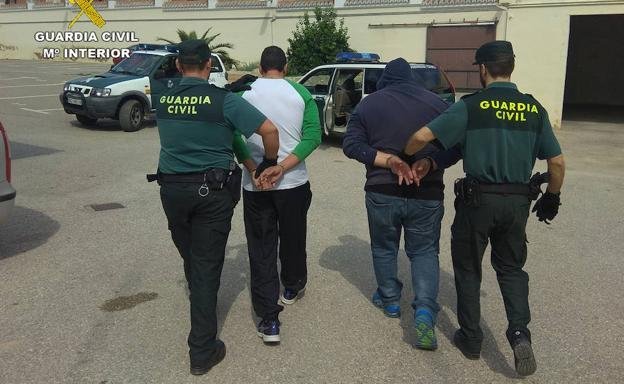 Two residents of Albudeite aged 53 and 49 have been arrested as alleged perpetrators of 5 robbery crimes in Archena and Librilla, both of whom have a history of similar crimes, reports the Civil Guard.

Effective Prevention of Citizen Security Benemérita initiated the investigation after detecting the commission of several robberies with force in rural areas of both populations.

The first investigations were carried out in the place where the criminal acts materialized, several country houses and an industrial warehouse, to gather all the possible indications with the purpose of clarifying the crimes and arresting their perpetrators.

It is clear from the investigation that the perpetrators carried out their criminal activity in areas with little traffic, in order to avoid being surprised.

To do so, they accessed secondary roads to the place where the buildings were located, mainly country houses, and using force they entered the interior to remove all the effects of value and easy commercialization in the illicit market.

As a result of the investigation, the civil guards identified the vehicle allegedly used by the perpetrators to commit the criminal acts and that had been detected in several of the reported robberies. The vehicle belonged to a rental company, which made it even more difficult to locate the authors.

The detainees, with a record of similar crimes, together with the proceedings ordered, have been placed at the disposal of the Magistrate’s Court of Mula.