The Minister of the Presidency announces that the new actions planned under the Works and Services Plan will involve a contribution of more than 250,000 euros 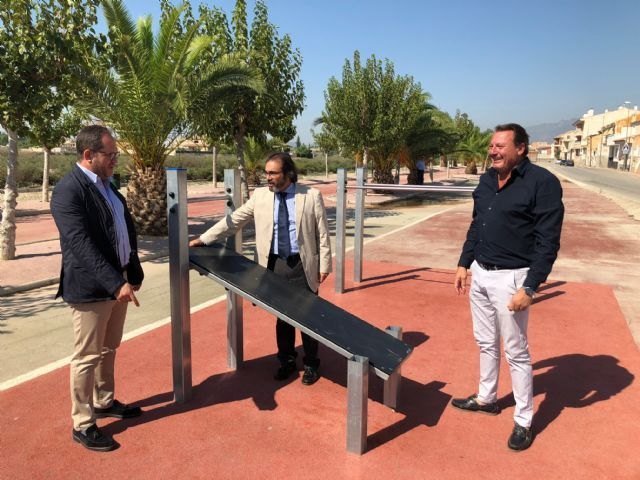 The Community promoted actions in Ceutí during the last two years, charged to the Works and Services Plan, amounting to 247,000 euros, said today the presidential adviser, Pedro Rivera, during his visit to the municipality.

Rivera, who had a meeting with the mayor of the town, Juan Felipe Cano, and members of his team before visiting the works carried out, recalled that these are «actions of great social significance, as we talk about the renovation of the lighting in a series of green areas, parks or bike lanes, very used by neighbors, installation of sports equipment outdoors and construction of a playground area.

«They are not works of great economic value, but they have a direct impact on everyday life and represent an immediate improvement and benefit for the municipality and its neighbors, as well as works that, like all of these plans, allow us to face investments that result in the improvement of the quality of life of the population and that the City Council, by itself, would be very difficult or impossible to address, «said the counselor.

The works carried out in accordance with the 2017 Works and Services Plan have cost 144,000 euros, of which 115,000 are contributed by the Community and the rest by the City Council, while those of 2016, consisting of the extension of municipal bike lane and the paving of sidewalks in several streets amounted to 103,000 euros.

The councilor announced that the new Plan of Works and Services of the regional government, which covers the 2018 and 2019 years, «so that more ambitious investments can be made by the municipalities», will mean an investment of more than 250,000 euros for Ceutí, that will be applied to continue with the extension of the bike path and the improvements of pavement and equipment in several streets and green areas of the municipality.

Rivera stressed that these actions, which must be awarded before the end of the year, «will have a very significant impact on the well-being of the residents, on making the population more liveable for them, on influencing the importance of exercise for health and on the adoption of basic measures for environmental sustainability «.