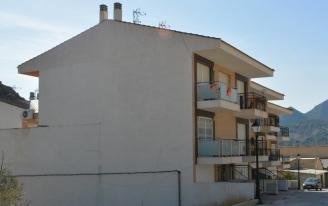 Dismantle the point of drug production in the house of one of those involved in the crime of Charco Lentisco
The Civil Guard yesterday dismantled a point of sale and cultivation of drugs in the neighborhood of Las Cañás, in the municipality of Ricote, and arrested a middle-aged man as alleged perpetrator of a crime against public health. The circumstance arises that the detainee belongs to the Yepes clan and remained in prison until 2006 sentenced, along with the deceased businessman Manuel Costa, for participating in the crime of bullfighters Albacete in the ciezana property of Charco Lentisco in the year 1990, as police sources confirmed to this editorial.

The dismantling of the plantation occurred mid-morning yesterday, and ended with the apprehension of some 300 marijuana plants that were being cultivated in one of the duplexes in the urban center of Ricote. The event caused great expectation in the town. One of the witnesses of the police action told this editorial that he had seen the Civil Guard with several bags in which the plants were put. The detainee was taken to the dungeons of the Civil Guard, where he is expected to go to court in the next few hours.

Under the light of the moon
The three young bullfighters, Juan Lorenzo Franco Collado, ‘El Loren’, 24 years old; Andrés Panduro Jiménez, 23, and Juan Carlos Rumbo Fernández, only 19, moved in December 1990 to Cieza to fight in the light of the full moon. To do this, they agreed to the rancher’s farm and, in full bullfighting, were shot to death.