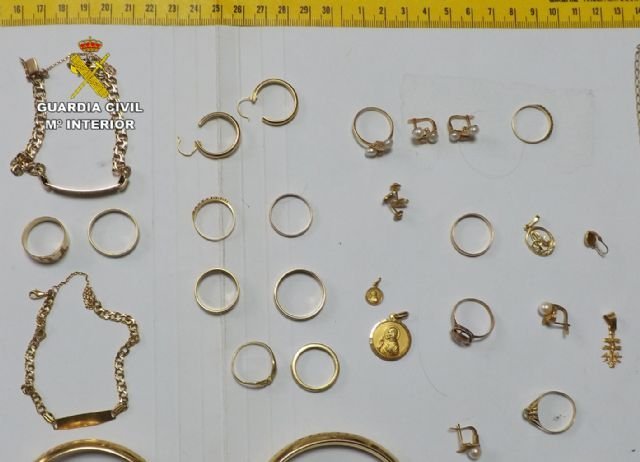 The one who was arrested committed the thefts when she was taking care of the dwelling dweller, who is disabled

The value of the stolen jewelry is around 4,000 euros

The Civil Guard of the Region of Murcia has developed an investigation to clarify the theft of a large quantity of jewelry in a house in Pliego, which has resulted in the identification, location and detention of a local resident as an alleged crime writer. theft.

Last August, Prevention of Citizen Security of the Benemérita began an investigation after collecting a complaint for the alleged theft of a large number of pieces of jewelry from an address in Pliego.

A local resident filed a complaint in which he informed the agents that for some time he had noticed that he was missing gold jewelry from his home, where he lives together with his wife, who is disabled, although there was no observed signs of forcing or escalation in it.

The Civil Guards focused the investigation on the closest environment of the victims and found that the woman, who sporadically usually attends to the complainant’s wife, had made several jewelry sales between the months of February and August, in shopping establishments. -sold gold of Mula and Las Torres de Cotillas.

The agents checked the deliveries of the pieces of jewelry and the complainant acknowledged, without any doubt, that the jewels sold by this woman were all his property and were reported as stolen.

Once all the necessary evidence was obtained, during the morning of yesterday, the Civil Guard located and arrested the suspect as alleged author of theft crime.

During the investigation, the agents have recovered part of the jewelery stolen, estimating that the value of all the pieces would be around 4,000 euros.

The Spanish arrested woman, 37 years old and neighbor of Pliego, together with the recovered effects and the diligences instructed, has been put at the disposal of the Court of Instruction of Mula (Murcia).