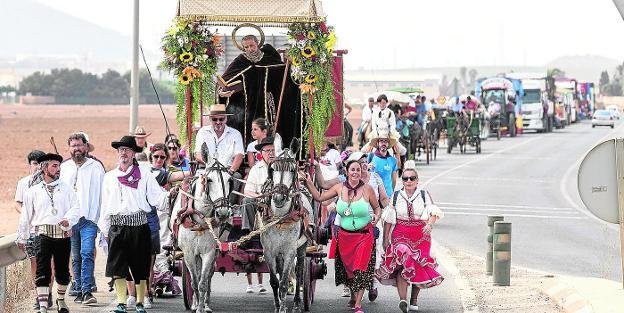 Dozens of pilgrims move the San Ginés de la Jara image from Cartagena between music and prayers. Folk costumes, horses, carts and floats give color to the march to the area of ​​the medieval monastery, where there was a party until dawn.
A flea market and a camping at the foot of Mount Miral yesterday highlighted the pilgrimage of San Ginés de la Jara. Renewing the tradition of moving the sculptural image to the surroundings of the medieval monastery that bears the name of the saint, on the Saturday of August, dozens of people showed their devotion to the patron saint of Cartagena. They did it on foot, on horseback, in a cart and in a chariot along streets, roads and paths, protected from the sun by awnings, hats and handkerchiefs, and by singing and praying.

The food tastings, such as chocolate buns, giant paella and granitas were continuous on the way through the neighborhood of San Ginés and the towns of La Aparecida, Roche, Los Camachos and Estrecho de San Ginés. And the day, which started at eight in the morning with a mass, a wreath and the singing of the Salve Cartagenera in the basilica of the patron saint, Charity, ended at dawn with the musical performances of Mari Carmen Baños and Pikú. It was the culmination of hours and hours of fervor and fun, among the colorful folk costumes, flamenco and sevillanas.