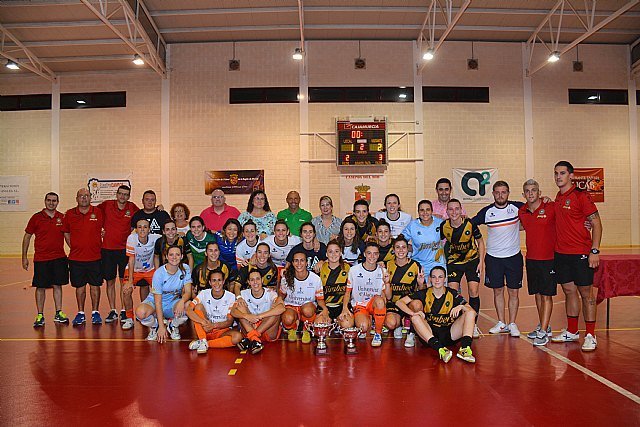 Pérez Cerón: «In the coming months there will be more relevant sporting events that will have the Campos del Río stage»

The municipality of Campos del Río became yesterday in the epicenter of the best female soccer in the country in the framework of the ‘III Jimbee Melon Trophy’ that faced the current champions of the national league first division football, the girls of the Jimbee Roldán FSF, with the third classified of the regular league, the University of Alicante that to 5 minutes of the end tiempaded with those of Roldán obtaining the 1 – 2 final that gave the victory to them.

With a vibrant Guatazales pavilion and an entrance higher than a hundred spectators, the girls of the Jimbee Roldan FSF were supported at all times by the fans who enjoyed the game of both teams in a clash of superior category.

The match was attended by Luciano Herrero, President of the Murciano Futsal Committee and former international player who had words of appreciation to both clubs and the City of Campos del Río «for the impeccable organization of the meeting.» Together with the mayor María José Pérez Cerón, the meeting was attended by different councilors of the Municipal Government Team, the president of the Roldán FSF and directors of Jimbo Fresh, the company sponsoring the trophy.

The mayor of Campos del Río delivered the trophy of champions to the University of Alicante and for his part the president of the Murcia football committee delivered a deserved recognition to the team of Roldán. After the delivery of plaques and thanks to both clubs and managers of Jimbo Fresh for their commitment to women’s football, it was the turn of the interventions where the first mayor gave thanks to the two teams for the effort, improvement and sportsmanship in the fight for the ball that they showed in the Guatazales court and thanked them one more year for choosing Campos del Río for the tournament. Pérez Cerón had words of thanks for the Murciano Futsal Committee, in the person of its president Luciano Herrero and wanted to put back in value the magnificent and close relationship existing since 2016 between the Roldán FSF, Jimbo Fresh and the consistory campero.

The mayor thanked «all those who have worked so that the day of last night was a resounding success» and put the accent on «the importance for our municipality to host events of this magnitude that place Campos del Río on the national sports map thanks to the firm commitment that we carry out from the City Council with sports in general, in particular with Futsal in all its categories, from the bases to the elite categories, and especially with the Feminine Futsal in all categories » .

Pérez Cerón concluded his speech by announcing that «in the coming months there will be many more important sporting events that will have Campos del Río stage and that serve, among other things, for fans and fans arriving from other points of the national geography, to visit Campos del Río and enjoy the tourist attractions offered by the municipality throughout the year, combining a day of sports and tourism and benefiting the local economy «.