Pérez Cerón: «My priority is to continue working to improve the lives of campers and campers.» 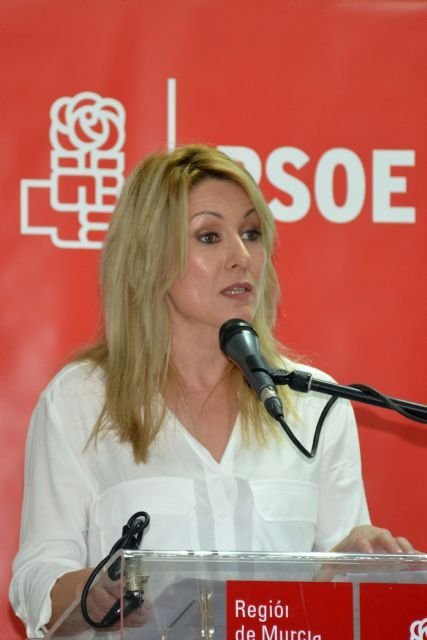 Ander Gil conveyed to the mayor the message of support and support from the President of the Government, Pedro Sánchez

The mayor of Campos del Río and general secretary of the PSOE of the municipality, María José Pérez Cerón was presented as a candidate for re-election by the Government Delegate and Secretary General of the PSRM-PSOE, Diego Conesa and was sheltered by the spokesperson of the Socialist Group in the Senate, Ander Gil who publicly conveyed the support and support of the President of the Government of Spain, Pedro Sanchez and the entire Federal PSOE.

A hundred of camperos and camperas went last night to the act of presentation of María José Pérez Cerón as candidate for reelection for mayor of Campos del Río in the municipal elections of next May 26, after being unanimously elected by the socialist militancy of Campos from the river.

Accompanied by Murcian senators, deputies of the Socialist Parliamentary Group in the Regional Assembly, mayors, general secretaries of many municipalities in the Region of Murcia and leaders of the PSRM executive, Pérez Cerón began his speech taking stock of the three and a half years in front of the City Council of Campos del Río and the general secretariat of the party in the municipality that has tripled the number of affiliates in recent years.

The mayor recalled «the disastrous inheritance received by the Popular Party in the previous term» and the state in which the municipality was when he came to the mayor’s office accompanied by his Government Team. The socialist leader highlighted the measures implemented through the socialist policies in Campos del Río in education, Social Services, Agriculture and in the important effort for the restoration of municipal accounts by approving a balanced and realistic budget. Policies that have always been marked by the premise of Citizen Participation and with the leading role of all local associations and collectives «for all and all the campers to do the Campos del Río that we deserve» affirmed Pérez Cerón who assured «My priority is continue working to improve the lives of campers and campers. »

The mayoress and candidate for re-election, spoke about the importance of reindustrialization in the municipality and requested the help of the deputies and socialist senators to urgently get the start of activity in the canning factory of the municipality and the restoration of the jobs for the citizens of Campos del Río.

To tender the Northwest Arc

The delegate of the Government of Spain in the Region of Murcia and general secretary of the PSOE in the Region, Diego Conesa, took the opportunity to publicly acknowledge the tireless work of María José Pérez Cerón stating that «your people love you, your neighbors love you and that is your best guarantee «while emphasizing the importance of the policies that the Government Team is developing in the municipality. Conesa announced in Campos del Río that in the coming weeks the works of the Northwest Arc, communication and development infrastructure that is so important for the municipality and the region, will be put out to tender, and acquired its commitment to the campers and camperas to give a definitive solution to the RM-531 highway that links Campos del Río with Alguazas.

For its part, the spokesperson of the Socialist Group in the Senate, went to Campos del Río to support the mayor of which he said, «María José, you are a great policy» while publicly conveying the message of support and support of the President of the Government and general secretary of the PSOE, Pedro Sánchez, as well as of all the Federal PSOE.