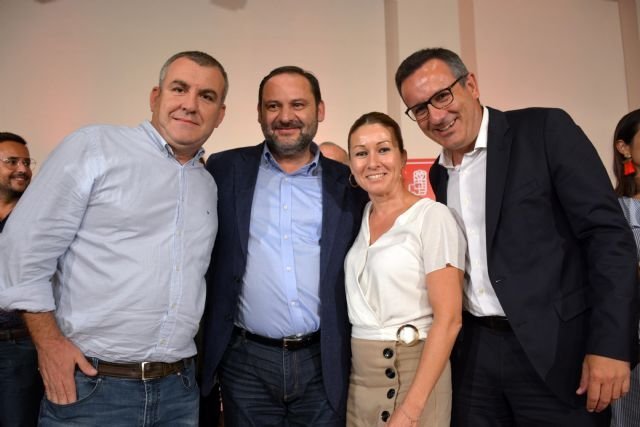 The mayor and general secretary of the PSOE of Campos del Río attended the opening ceremony of the electoral campaign for the municipal and regional elections of 2019 that was attended by the Minister of Development of the Government of Spain and secretary of organization of the PSOE, José Luis Abalos.

María José Pérez Cerón, was accompanied by several PSOE militants from Campos del Río, among whom were councilors of the Government Team in an event that was attended by different mayors, mayors and general secretaries of the PSOE of the Region of Murcia, headed by the Delegate of the Government of Spain in the Region and the Secretary General of the Murcian Socialists, Diego Conesa.

In the act celebrated in the University of Murcia, Diego Conesa, acclaimed like future president of the Region of Murcia, affirmed that the PSOE is prepared to color of red socialist all the Region «something that we will only achieve with honor, bravery and working for our neighbors who will be the true protagonists of the real change that the Region of Murcia needs. I’m going to let the skin do it. »

In his speech, Ábalos said that the PSOE is prepared to win any election and is not afraid of the decision of citizens at the polls, while he defended the legitimacy and management of the Government of Pedro Sanchez, in the face of criticism of a right that «has no patrimonial title over this country».

Regarding infrastructures, the Minister emphasized «our way of doing participatory politics, because it is useless to do works without active participation and taking into account the opinion of citizens who are the axis of socialist policies».

The mayor of Campos del Rio and general secretary of the socialist peasants, María José Pérez Cerón, argued that «we socialists are the ones who govern listening to citizens, making them participants in our policies and counting on them when making decisions, that is the way to govern a country, a region and a municipality as we have been doing for more than three years in Campos del Río where we have changed the obscurantism and the neglect of the previous Government for new opportunities and facts that are a reality and that benefit directly to all the campers and camperas. That’s the difference between the PSOE and other parties. »

Pérez Cerón put in value the decisions taken by Minister Ábalos and the Secretary of State for Infrastructures, Pedro Saura, «that without delay become facts as this Monday 17, the new daily hybrid train service will come into operation that will unite the capital of the Region with Madrid in only 3 hours and 20 minutes and the important announcement for Campos del Río of the imminent bidding of the Northwest Arc included in the General Budgets of the State that will considerably improve the communications of our municipality with the rest of the region and the Region of Murcia, in a clear commitment to infrastructure in our territory of the Government of Pedro Sanchez that is close and sensitive to the needs of the Region of Murcia and all its municipalities. «