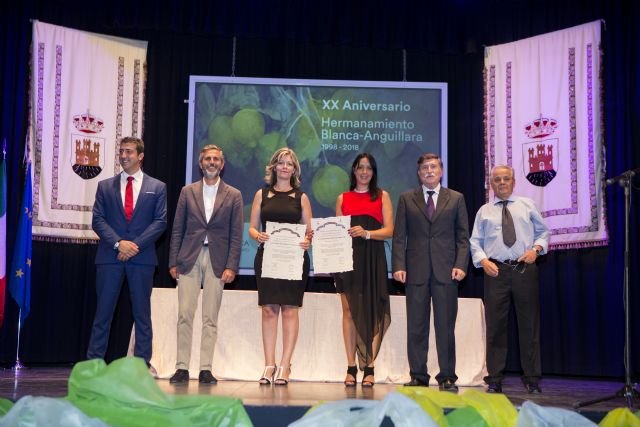 The municipality of Blanca has renewed the signing of the Twinning agreement with the Italian town of Anguillara Sabazia, in a very emotional ceremony that hosted the Victoria Theater with a full house.

On August 10, 1998, the agreement was signed whereby the municipality of Blanca was associated with that of Anguillara Sabazia. Two towns united by the figure of the painter Pedro Cano, who has his residence in both municipalities. The then mayors, Rafael Laorden Carrasco and Paolo Bianchini, institutionally initialed the beginning of school exchanges, trips, customs, traditions, parties … Twenty years of experiences creating bonds between the citizens of La Blanca and the Anguilla.

Prior to the act in the theater, a photographic exhibition was inaugurated in the Municipal Exhibition Hall and the book made by the Official Chronicler of Blanca, Ángel Ríos, about 20 years of twinning was presented.

Once at the Victoria Theater, Peñas Huertanas de Blanca, La Capaza and El Ciecón opened the event with the Jota de Blanca that moved the audience, who gave a great ovation to the members of the supporters’ clubs, who also performed the Jota del Rincón (El Ciecón) and Las Alegrías (La Capaza).

The gala was presented by Inma Martínez and María José Ramos, who conducted the event in Spanish and Italian as a sign of affection and gratitude to the Italian «brothers» who were in the Victoria.

Saverio Fagiani, Adoptive Son of Blanca since 2013, was in charge of opening the interventions of authorities. After him, the painter Pedro Cano, Favorite Son of White and Honorable Citizen of Anguillara Sabazia, «the architect of this Twinning», as defined by the Councilor for Culture, Ángel Pablo Cano, in his speech prior to signing.

The City Council of Blanca recognized the work of the Istituto San Francesco during these 20 years of Twinning in which it has participated in school exchanges, giving it recognition.

After this award, the renewal of the Twinning agreement was signed by the Mayor of Blanca, Ester Hortelano; the Sydaka of Aguillara Sabazia, Sabrina Anselmo; the councilman of Culture of the municipality of Blanca, Ángel Pablo Cano; and the Consigliere de Anguillara Sabazia, Aleandro Virgili. Those who were mayors were also signed during the first signing on August 10, 1998, Rafael Laorden and Paolo Bianchini, who acted as witnesses of it.

After the signing, the mayors closed the capsule of the time that has been exposed in the MUCAB so that every citizen who would like to include some reminder of the Twinning could do so. The capsule will be deposited in the Plaza del Ayuntamiento.

The gala was attended by the Minister of Tourism and Culture, Miriam Guardiola who, in her speech, encouraged the audience to sing the happy birthday to the painter Pedro Cano who was celebrating the same day.

The act continued with the screening of a video made by Ángel Ríos that gave way to the performance of the Agrupación Musical de Blanca that performed the anthems of Italy and Spain, ending the act with the hymn of the Twinning created by the director of the WBA, Víctor Cano

At the end of the gala, a sheet of Pedro Cano was delivered to all attendees.