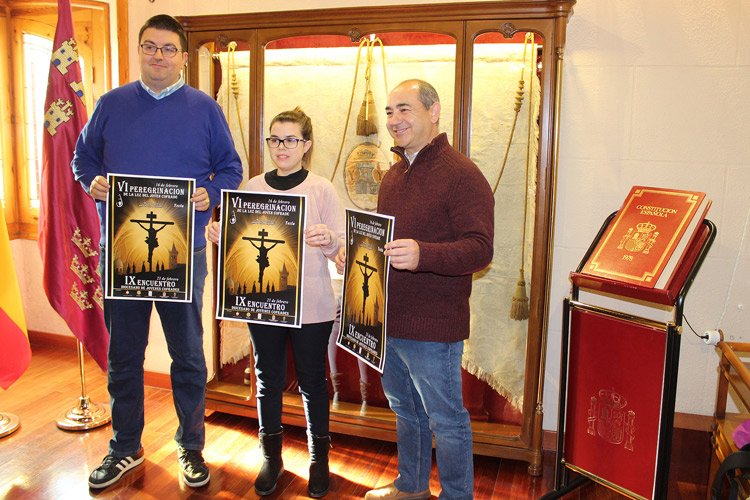 Two remarkable acts before Lent. In the next days, the VI Pilgrimage of La Luz del Joven Cofrade and the IX Diocesan Encounter of Young Cofrades will be developed. Both acts are celebrated in Yecla on February 16 and 23, respectively. The organization is from the Diocese of Cartagena, with the collaboration of the Tourism Department itself.

The Councilor for Tourism, Jesus Verdú recalled that «the motto of these two activities, My light guides you, take your cross and follow me, conveys the meaning of these meetings. We can not forget that young people are the relay of our society and therefore of our Holy Week. They are the ones to whom we must yield the witness, those who must take the light that illuminates our path »

Sandra Palao and Lino Moragón, on behalf of the young brothers of Yecla, who have assumed the co-organization of these activities, have explained that next Saturday, February 16, the VI Pilgrimage of La Luz de la Luz will take place in our city. Young Cofrade.

The previous concentration will take place in the Church of San Agustín, in Jumilla, where the light will be given to the young people of Yecla, who will transfer it to the Church of San Francisco around 11 in the morning. From that point will begin «The path of light by Yecla» with the route of the churches. We will visit the parishes of Niño Jesús, Santa Bárbara, San José Obrero and ending in the Purísima Concepción, where the light will be located all year round. During the journey you will walk through the central streets of the city and streets of the old town. At the end a meal will be offered to the attendees.

As for the IV Diocesan Meeting of Young Cofrades, it will be held in Yecla February 23, in the Church of San Francisco. The opening ceremony is scheduled for 10 in the morning. Next, the presentation will be presented «The call Cofrade, youth as the voice of the brotherhoods» by Pablo Romero Santa, coadjutor of San Juan Bautista de Archena and Ntra. Sra del Rosario de La Algaida.

Lino Moragón, Sandra Palao and Jesús Verdú.
Later a round table will be held on this same paper, with the participation of young members of Archena, Jumilla, Molina de Segura, Santomera and Yecla. Next, an audiovisual presentation will be screened on Holy Week in Yecla.

Then, the attendees will go to the Basilica of the Immaculate where the Holy Mass will be held, ending the meeting with a meal in a restaurant in the city after which the conclusions of the meeting will be presented and next year’s headquarters will be chosen.