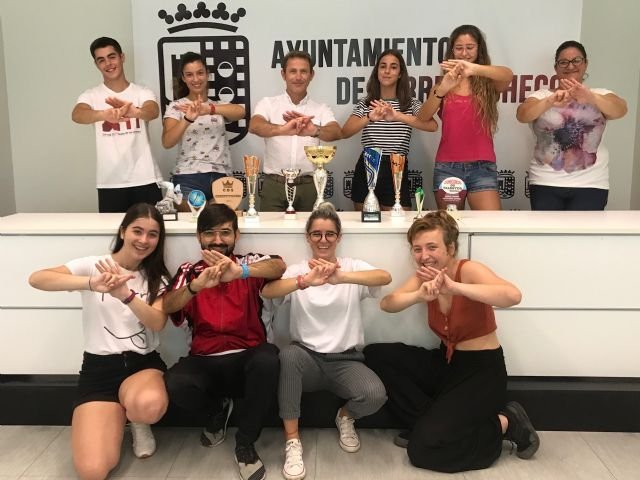 Torre Pacheco Replay Association, again highlighted in the Nonduermas Choreographic Contest, an event where all dance schools of the Region of Murcia that currently compete at the national level met.
The Mayor of Torre Pacheco, Antonio León accompanied by the councilor of Fiestas, Yolanda Castaño have received at the City Hall members of the Replay Association, young dancers who do not stop to go on stage and add prizes and successes, along with Santi García, professor of dance.

The last success achieved by Replay was on September 10 in the III Edition of the Carné Joven Nonduermas Choreographic Contest, an event that had the participation of some 400 young people directly and 2,500 indirectly, and which aims to promote social equality , integration, and sports. The first prize of the contest was for Replay, endowed with 400 euros, also getting the first place in category couples with dancers Irene García and José Barrancos, who also won the trophy for best dancer, adding 100 euros and a trophy. More than 3 hours of urban dance and its different branches, where groups from all over the region participated.

León has congratulated Lourdes, José, Marta, Cristina, Ana, Aaron, Ana María and Irene, for their career in the world of dance and for the successes achieved, highlighting the work of Santi García, dance teacher and soul of the Association , which currently has more than 100 dancers.

Castaño, highlighted the close relationship that the Association maintains with the Town Hall, thanking them for their collaboration and participation in different events and activities programmed in the municipality. In addition, he reported that next Friday September 21, in the act of election of the Queen of the Fiestas of Torre Pacheco 2018 the Replay Association will act together with the Municipal School of Dance, brightening this event that indicates the start of the Patron Saint Festival