Hundreds of people have shown their rejection of the act attended Citizens, PP and Vox 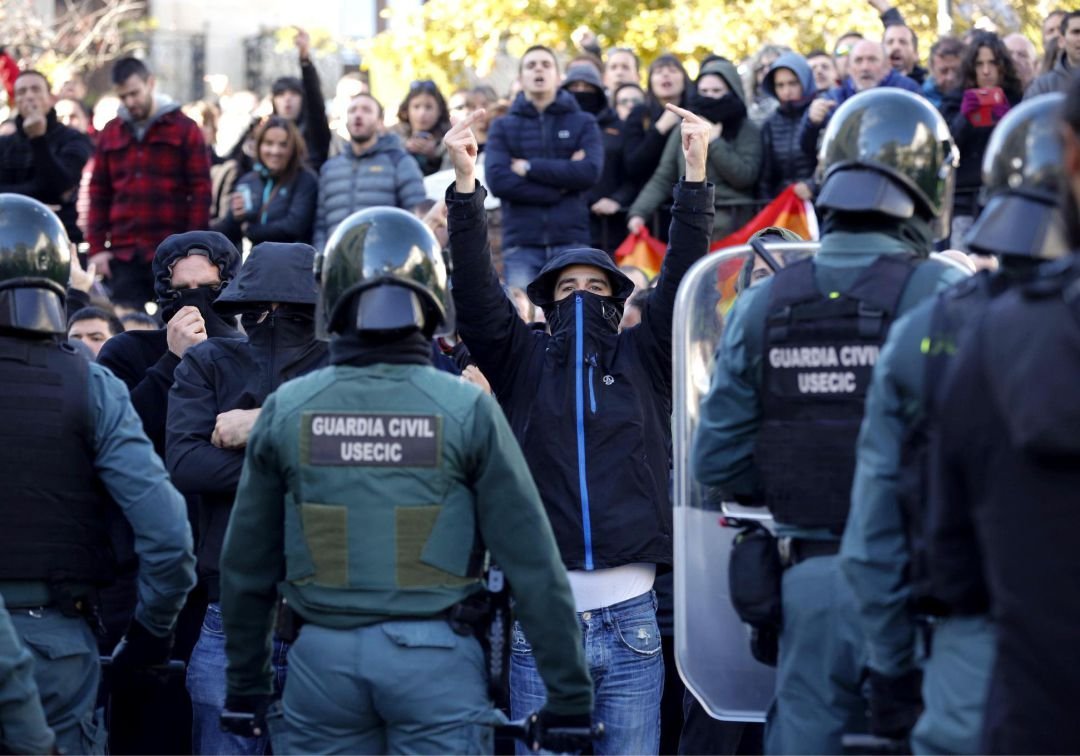 Hundreds of people protest in the streets of Alsasua against the event organized by España Ciudadana that brings together leaders of Ciudadanos, Partido Popular and Vox this morning in Navarra, which has given rise to some moments of tension.

A strong device made up of agents of the Foral Police and the Civil Guard has been deployed through the streets of the town to avoid incidents among those attending the event and the people who congregate around the Plaza de los Fueros.

Also, a cord integrated by neighbors of the locality tries to maintain the calm and also avoid that any type of altercation takes place.

The moments of greatest tension have been lived when after eleven o’clock in the morning the people attending the event organized by España Ciudadana have begun to arrive in the town, many of them with Spanish flags and with cries of «viva España, viva la Guardia Civil».

These cries have been answered with whistles and with signs of reprobation in Basque with slogans such as «out of here» or «outside fascists».

Meanwhile, in the Plaza de Iortia, at the initiative of the assembly » Vecinos de Alsasua ‘, a peaceful and festive act is held in response to what they consider a «more grievance, but with a dose of cruelty that can hardly be understood more beyond obscure interests and a practice with clear fascist reminiscences «.

Rivera asks in Alsasua with PP and Vox to reconstruct the Spanish common project
The president of Citizens, Albert Rivera, asked today in a political act in Alsasua, which has been supported by leaders of the PP and VOX, «rebuild the common Spanish project» and «the constitutionalism of the XXI century.»

The act had been called by Spain Citizen to support the Civil Guard two years after the aggression suffered in a bar by two agents and their partners, and defend a Navarre in Spain against nationalism and independence.

Have been present on behalf of the PP his spokesman in the Senate, Ignacio Cosidó, and on the part of VOX its president, Santiago Abascal, José Antonio Ortega Lara and Iván Espinosa de los Monteros.

Both Rivera and the rest of the speakers have had to talk between the sounds of sirens and the chimes of the church located in the Plaza de los Fueros, where the meeting was held, which has made it extremely difficult to hear his words.

In parallel, the assembly of neighbors of Alsasua, in another square of the locality, has celebrated with recreational and cultural activities a space «for the rights and the freedoms», and in a third point of the locality there have been appointment groups of young people that in demonstration, watched by the Foral Police, they have arrived until the proximities of the Plaza de los Fueros to show their rejection to the act of Citizen Spain.

Supported on crutches and the cry of «president, president», Albert Rivera has arrived to the stage where he began by pointing out that despite the injury suffered playing tennis, you could not miss going to «this wonderful town that is Alsasua».

In his intervention before several hundred people, Rivera has defended respect for people «although not all ideas are equally respectable, and that is why we are here», is «the difference between democracy and nationalism», which has blamed for «imposition, division and breaking the rules of the game».

In fact, he stressed that the civil guards and their partners were attacked two years ago «for being» civil guards and that is «attacking coexistence and trying to liquidate the State», a «scandal that we can not stop being scandalized» because of otherwise «democracy will end».

«That is why today we are coming to a town in Spain without asking for permission, asking for a step despite the difficulties», he stressed, and he has encouraged not to be stepped on by the «radicals», while ironically he has thanked for the ringing of bells «for the victims» while criticizing some murals in the square with the faces of «the executioners».

For Rivera this has been «a tough week», also because of the decision of the State’s lawyers not to accuse the politicians accused of rebellion in the procés, a formula that, in his opinion, «harms the State in favor of those who they want to liquidate. »

He has therefore urged «to work together to seek justice, what the victims of terrorism have always wanted and we also ask the democrats,» and warned that «pardons are immoral» when they «jump justice.»

That is why it has announced that Citizen Spain will hold on November 25 an act in Madrid with the slogan «yes to justice not to pardons» because, Rivera said, «there are too many sacrifices» of judges, prosecutors, policemen, councilors and relatives to now give away «impunity those who have tried to strike».

And so he has advocated «a state pact for the ducation, for respect and freedom, to supervise and harmonize the classrooms «throughout the country, and for» reconstructing the common Spanish project «and the» constitutionalism of the 21st century «in the face of nationalisms and populisms.» Let us not confuse ourselves as an adversary , we must unite, add, shake hands and flee radicalism and extremism «to» not divide the country with false red and blue labels when someone wants to break the country, when the debate is freedom yes or no, «he asserted. Rivera has pointed to conclude that «today in Alsasua constitutionalism has to come out reinforced, because the sanchismo will only be a parenthesis and then come the constitutionalism of the XXI century». Before, the writer Fernando Savater has defended a Navarre together with the Basque Country that to Andalusia and the rest of communities to form «a free State». A State, he said, in which the security forces are in charge of defending the citizenship, but has also asked to overcome » rruños «and think about European citizenship, which» is the backup of national citizenships and that they defend fundamental rights. «» We seek to build a united Spain and a united Europe for a liberating cosmopolitanism, «he said. her part, Beatriz Sánchez, as a victim of ETA, has demanded that «the true story of ETA be known in which the victims are the protagonists, that justice be done to them, and that they be dignified,» and she has also requested that the prisoners of the band «comply with their sentences in full, without benefits of any kind, because if ETA has been dissolved it has been thanks to the work of the Civil Guard and the National Police, which so many comrades have left on the way».