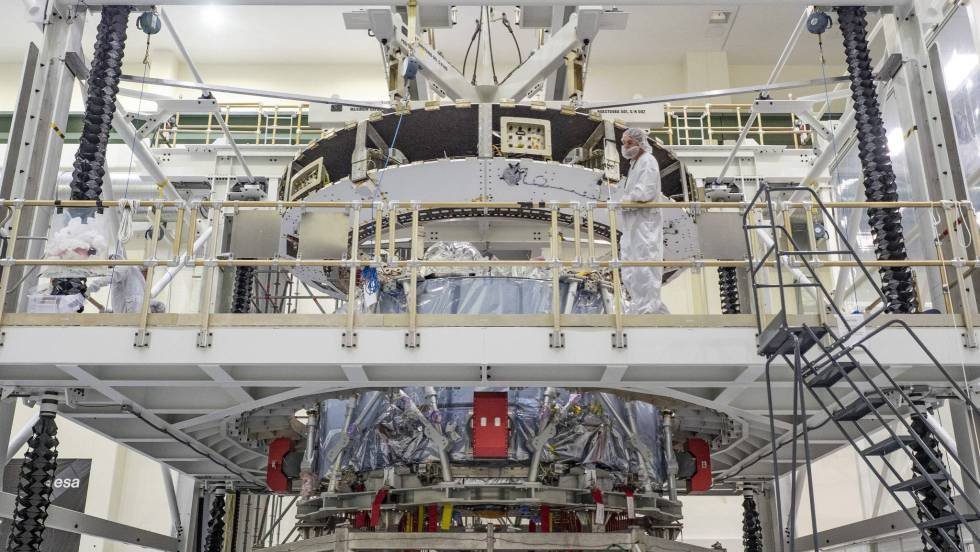 Source: El País
The vehicle built by NASA and the European Space Agency may travel to Mars.
When Neil Armstrong and Buzz Aldrin arrived on the Moon in 1969, the force that drove them there was, above all, politics. Years earlier, in 1957, the launch of the Soviet satellite Sputnik 1 triggered the space race and accelerated the Apollo program to success. Now, NASA is preparing to send astronauts back out of Earth’s orbit, starting with the Moon and finally reaching Mars. But this time it is not a competition and this time it does not do it without help. Orion, the American ship that will lead the rebirth of manned missions to deep space, has the collaboration of the European Space Agency (ESA), responsible for half of the construction. Lacking just to test all the components together, Orion is today less than two years from its maiden voyage, and three or four years from the first manned takeoff.

NASA launches the prototype of its new spacecraft
«The competition accelerates the projects, but cooperation allows them to happen,» said Johann-Dietrich Wörner, the director general of ESA, from a hangar at the Kennedy Space Center in Florida (USA). A few meters behind him, a metallic cylinder five meters in diameter and as many meters long stands on scaffolding. It is the newly completed service module of the Orion ship, which arrived last week in the United States from Bremen, Germany. There is the headquarters of Airbus Defense and Space, the division of Airbus Group that has been responsible for building the device and has paid the trip from El Pais to Florida. According to Philippe Deloo, director of the Orion project in Europe, that cylinder full of instruments is «one of the best engineering pieces of the ESA».

The service module supplies air, electricity and propulsion to the ship, among other vital functions, and is one of the two main components of Orion. The other is the crew cabin -the only reusable element-, a truncated cone with a volume of 20 cubic meters and capacity for six astronauts, whose construction has been carried out by Lockheed Martin and the American agency itself. «Historically, the United States has shown suspicion when delegating critical elements of the mission to other countries,» said Jim Bridenstine, the administrator of NASA, by telephone conference at the Space Center (his flight from Washington DC to Florida it was canceled due to bad weather). «Now we have decided to collaborate on large projects that no agency can do alone. I think it’s a very positive change, «he added.

This week, with the assembly at the Kennedy Space Center of both halves – the service module and the crew module – the Orion spacecraft is born: the vehicle that will kick-off a new era of space exploration manned in deep space. The goal of the United States is no longer to run for being the first country to nail the flag to the next planet in the Solar System, but to develop a «sustainable» program of exploration and long-term scientific research. A program that «will make everyone else look small», according to Guillermo González, head of control of the ESA’s manned missions and, until a year ago, head of control of the Orion project in Europe.

The new spacecraft is the heart of that plan. With it, the current generation of astronauts will travel to the Moon’s orbit, from where robots will soon be able to control the surface of the satellite. This technology is already being tested with machines that move on the surface of the Earth under the control of astronauts on the International Space Station. All in all, space exploration is approaching its coming of age, the moment when it will emancipate itself from the ground control rooms and begin to direct operations from space.

THE LUNAR PORTAL
Orion does not have a cargo hold like the space shuttles that orbited the pieces of the International Space Station, but it does have powerful engines that can take it out of Earth’s orbit. In the future, it will be able to tow components to build a space station that orbits the Moon, and from that «lunar portal» missions will be conducted further. «The Americans wanted to go to Mars,» says Guillermo González. «They have realized that they can not go within 10 years or 15. They will practice on the Moon and then go to Mars,» he explains.

A few meters from the hangar, the vehicle that will take Orion from Earth, a powerful rocket named Space Launching System (SLS), is prepared in one of the most voluminous buildings in the world.

English). With a height of 100 meters and a load capacity of between 70 and 130 tons, it is more powerful than any of the space shuttles or the Saturn V rockets of the Apollo program. In the summer of 2020, the SLS will take off with Orion for its first unmanned mission, a trip of approximately three weeks that will take the ship to surround the dark side of the Moon. When returning to Earth, the cabin (without crew) will be recovered, but the service module will be consumed in the reentry. ESA and Airbus are already preparing a replacement that will fly in the first manned mission, scheduled for 2022. Thanks to the agreements between NASA and ESA started in 2011 for the construction of Orion, Europe has extended its access to the Space Station International during the next years. If the European member states agree to this, it is likely that the collaboration will continue with the manufacture of service modules for many more missions. «In the future, we expect you to order lots of modules, for example four at a time,» said Oliver Juckenhöfel, responsible for orbital services and exploration of Airbus. «Doing them one by one is not going to be efficient,» he clarifies. NASA’s new deep space exploration program has suffered many delays, but there is no longer any doubt that it will move forward, with a stop on the Moon for the next decade and predictably an arrival to Mars in the next decade. «You can see it, you can taste it, you can touch it. We’re leaving! «The voice of the narrator was thundering in a promotional video from NASA through the hangars of the Space Center