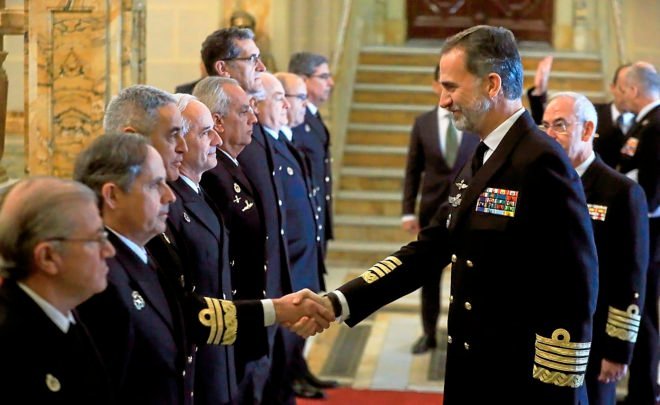 In the upper echelons of the State they do not want to repeat the same mistake. The scars of the absence of Don Juan Carlos on the 40th anniversary of the first democratic elections in Spain, held in June 2017, are still being seen. Despite the fact that from the Casa del Rey, the Government and the Congress assume the difficulty of fitting their figure, sheltering in matters of protocol, and although its presence was not contemplated in the splendours, in the last hours it has been confirmed the necessity of its presence. «Don Juan Carlos is going to be present,» say the government’s tight sources directly involved in the planning of the solemn act for the birthday of the Magna Carta, which will be held on December 6 in Congress.

In the last hours the conviction has settled that one can not repeat the mistake of a year and a half ago, when Don Juan Carlos was the great absentee in the anniversary acts for the 40 years of democracy. A circumstance that provoked his anger, which he himself moved to his environment and wanted to be made public: «It was an act of cowardice and fear.»

Casa del Rey, Government and Congress work in an act where the protocol fits your figure

Proof of this rectification is that the official agenda of the acts for the 40th anniversary of the Constitution has modified the description of the act scheduled for December 6. As EL MUNDO has confirmed, until the beginning of this week, on the official website -managed by the Cortes Generales- that day is the «Institutional Act of the Constitution Day», the most important of all those celebrated. throughout this 2018. And in the details of the event the place of it was specified: «In the hemicycle with SS.MM the Kings». That is, the same staging of the proclamation of Felipe VI as King or of the act by the 40 anniversaries of the first elections.

However, since a few hours ago, the details of the event have disappeared from the official website. That section does not appear anymore. Only it is collected that the act will be held in Congress, but the place is not detailed.

This change is important. Although it may seem a single nuance, it means opening the door wide to the assistance of Don Juan Carlos and Doña Sofía. In the midst of the controversy and criticism for its absence in Congress in June 2017 -criticisms even from political parties-, from the Casa del Rey wanted to argue their void in the need to adapt to the format decided by the Congress and stated that Had it been held in the Hall of Lost Steps, both he and Doña Sofía would have attended. They explained that there is only one King, that there is no precedent for two Kings in the Chamber, a protocol is not foreseen and that Don Juan Carlos no longer attended the proclamation of Felipe VI, an act to which his mother, Doña Sofía, did attend. in the Tribune of Honor.

Open the possibility that the solemn act is held in another branch of Congress is de facto to explore the fit of Don Juan Carlos. And is that the father of the current King was a key actor 40 years ago, because he signed, proclaimed and also voted the Constitution.

One option, which Zarzuela has already suggested, is that it be in the Hall of Lost Steps

One option that already raised the House of the King would be the Hall of the Lost Steps. A place where solemn acts are celebrated. For example, it is where the anniversary of the Magna Carta is commemorated each year; where the act of taking possession of the presidents of RTVE is celebrated; it welcomed the ardent chapel of Adolfo Suárez; or, precisely, hosted in September the presentation of the commemorative events of the 40th anniversary of the Constitution.

«If the ceremony were held outside the Chamber, it is obvious that the protocol tension would decrease because perfectly the honorific kings could be with Felipe VI and his wife, but after them or even their daughters if they were present (this precedence is State regulation ). By not being held in the Chamber, we would not be facing an extraordinary session and other more flexible protocol criteria can be followed, «explains Carlos Fuente, director of the International School of Events Management and Communication and Protocol Director of the Prince of Asturias Awards from 1997 to 2013 .

In any case, for the expert in protocol, the presence of Don Juan Carlos «is clearly justified». If held in the Chamber, the situation of the emeritus Kings «is a decision that should serve the Protocol Services of the State, the Congress and the House of His Majesty. You can not refer to protocol reasons for that decision, because the protocol what it does is establish orderings and precedences, but never political decisions like this one ». Of course, his personal opinion is that if held in the hemicycle, Don Juan Carlos and Doña Sofía should occupy the Tribune of Honor and not the presidency.

The ubication of the act, erasedAs a result of the acts of the 40th anniversary of the Constitution, the Cortes Generales created a website in which, among other things, the agenda of the commemorative events can be consulted. Until this week, on December 6 there was an act, whose details were: «In the Chamber with SS.MM the Kings.» Since a few hours, the details of the location have been deleted.