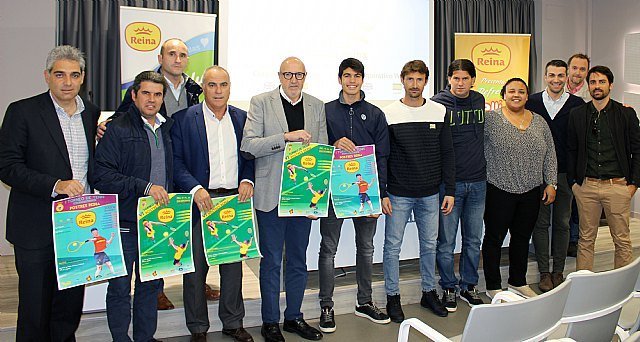 Desserts Reina has presented at its headquarters, located in Caravaca de la Cruz, the «I Queen Men’s Absolute Tennis Tournament». A new tournament that was born with the ambition to consecrate as a reference at the regional level.

From 19 to 26 December, at the height of the Christmas season, the facilities of the Real Sociedad Club de Campo de Murcia will host a really exciting test. Registration for the tournament can be made until December 14.

One of the great attractions of the tournament will be the presence of the current European and world champion Davis Cup sub-16, Carlos Alcaraz Garfia.

At the same time, the classic Queen of Minors Desserts Tournament will take place, this year celebrates its sixth edition and will feature the categories Benjamín, Alevín and Infantil in their men’s and women’s events, as well as the women’s sub-20.

In the presentation, by Grupo Desserts Reina have been present its President, Alfonso López Rueda, the General Director, José Manuel Lag and the Commercial Director, Antonio Martínez.

Also present were the Director of the Tournament, Francisco José Navarro, the former world number one, Juan Carlos Ferrero and the young tennis promise Carlos Alcaraz along with several members of his technical team.

The attendees have valued in a very positive way the birth of this new sports project, highlighting the commitment that Postres Reina has with the sport at regional and national level, and underlining the importance of being held in the facilities of the Club de Campo de Murcia.

Since Desire Queen has wanted to appeal to all those boys and girls from within and outside the Region of Murcia to participate in these tournaments. A way to encourage and promote sports.