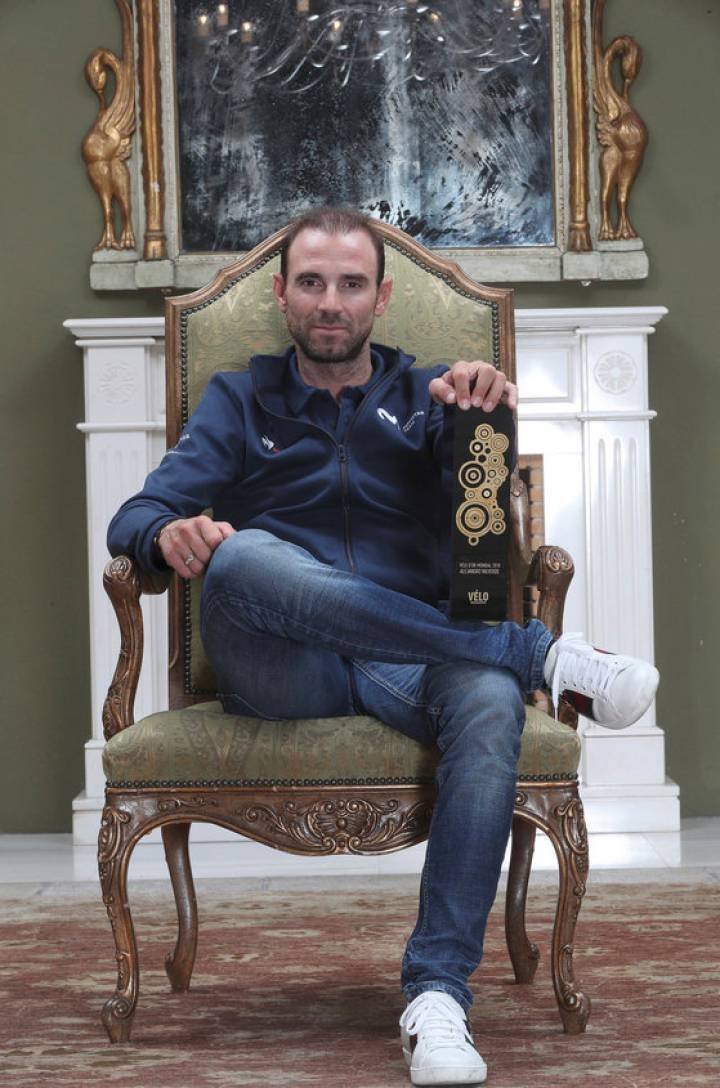 Alejandro Valverde spent in Pamplona all last week. He concentrated with Movistar to prepare the 2019 season, which will be his 18th year in the elite of professional cycling, and picked up a few awards. One of them, the Vélo d’Or, a kind of Golden Ball of cycling, reaches 38 years, only after winning the World Cup.

Question. In 2005, when he made his Tour debut at age 25, he beat Armstrong for a stage in Courchevel, and the Texan pointed his finger at him and announced to the world: «Here’s the future.» And it happened of all, Armstrong disappeared, and you were ready, but did not drop the witness …

Answer. In the end, there are so many years that in your career you have good things and bad things. The bad things? Well, there have been two. One, we all know, was my suspension of two years [2010-2011, by doping], which was a sinvivir for several years. I lived without knowing, I run, I do not run, what happens ?, what comes out in the press ?, and that is very fucking … Once they sanctioned me I said, look, they have already sanctioned me, I will comply . Fair or not fair, it is the same, I fulfill and they leave me calm and then run with total plenitude and that the whole world see who I really am. He won before and won later. It has been clearly demonstrated that Alejandro Valverde has won more and better than before, when he was younger.

All ages of Valverde

Alejandro Valverde wins the World Cycling Championship
P. And the Tour of the 17th, the injury.

R. It was a very fat injury [knee break], which made me wonder, is Alejandro Valverde going to be the same ?, right? And at 37 years old. And I have returned the same or better. This injury has not meant anything to me that is not more anger, more energy, and winning the World Cup with 38 years.

Q. One of the first reports that was made was called «The Merckx of Murcia.» You were 23 years old and 15 years later does not sound so much exaggeration …

R. It was not crazy to quote Merckx, no. Very few people then comply with what is their adventure. It’s amazing. If I am surprised myself, I … I can not stop being surprised, and, look, my hair stands on end thinking about it, because I’m hallucinated. Every year that goes by, I say, «fuck, if I’m better, if I’m better.» I’ve been here for three years and I say, «It’s been my best year, I can not get over it anymore either.» The next one arrives, and I improve it … I keep winning the same laps at the beginning of the year after the fall; In the Tour ?, well, I was not up to the standard but I was not going to dispute it either; and the Vuelta a España arrives, and being a bit of preparation for the World Cup, I arrive and I am playing until the end with two stage victories, and the World Cup comes, and I win with an impressive solvency … I am surprised and I do not leave to surprise me I myself hallucinate with me.

I feel more free of head; I have to force myself to rest »

A. I do not know if rejuvenation, but I do feel different, more head free. I, before, when I reached the end of the seasons, I would end up suffocated, I would say, «Oh, my bike, I just want to rest». Not now, now I have to force myself to rest, because I say, «I’m not tired, I want to go by bike, go out and do my 70 kilometers and have my coffee with my toast and my oil». And, no kidding, this morning I made a roller before the press conference and I finished the press conference and I went back to roll.

R. Yes, I do a little for that, but because I feel like it. It is not an obligation as before … I do what I have done today, in total one hour and 10 minutes between the two sessions, and I feel at ease, quiet, my beer … Before, no, before I ended up suffocated on my head .

Q. Was your dream this? Did you think this was going to be like that?

The Tour is the best race, but I am not obliged to go. There I do not enjoy »

R. No, no. I did not think that this was going to be the case. Come on, neither I nor anyone else. Is incredible. When I retire and seriously analyze my track record … Where has not this man won? Or if he has not won he has done second, or if not, third. In any race, in all. Then you say, how awful, impressive, impressive, I did not think much less that I was going to win this. And before and after the cataclysm …

P. «I will return and I will continue winning», he said when the penalty.

R. And if I do not fulfill it for a year, I intend that the following year will be fulfilled. And they are fulfilled … And I am always there. It’s weird that I fail, that I’m ready to play and I’m 60 or retire … I’m always there, fighting, I’m always in contention and that means I’m hungry, I’m hungry and I’m not tired of cycling far from it.

R. I must be at the exit of Flanders, and more with This maillot of world champion. I think I owe it a little to the fans and to myself, but I am also aware that we have to know that career very well. I can do better, worse, explode, have a puncture … P. And then he wants Giro y Vuelta, without Tour. Do not you think that a rainbow is bound to go to the Tour? I will buy a big truck, well labeled: ‘La Bala Verde’ R. No. I do not think so. The Tour is the best race, yes, but I’m not obligated. They’ll want me to be there, of course, but you also have to look at what’s best and what’s worse. And in the Tour I do not enjoy. When will he retire? After Tokyo 2020? R. I dont know. Do you know how I think I’m going to retire? I’ll say one day, «It’s all right, I’ve already covered a pretty good time in cycling», which would be, if nothing happens, 19 years, and say, ‘I think that already, what need do you have to be here suffering so much , although you like it, but suffering? ‘. P. As a young man he said that his dream was to be a truck driver like his father, the king of the road … R. Oh! Yes, yes, but that’s it … I really like trucks, and I’ll buy a truck to have it. I do not have the card, but to have a truck for me, a big truck, I would love that. I’ll have it parked there near the house, well labeled, La Bala Verde, something like that, similar, very handsome … THE TRIBUTE OF TXOMIN PERURENAA prize that Alejandro Valverde received in Pamplona had an emotional, sentimental character. He was given the Peña El Gesto, presided by José Miguel Echávarri, the director who signed him in 2004 for the team then called Illes Balears. In the meal that was celebrated was Txomin Perurena, the Gipuzkoa cyclist who won everything in Spain in the seventies. And the runner of Fagor and Kas, idol of all the fans of that time, got up, even more excited than Valverde, and said: «I have 156 victories, they say, more than anyone in Spain, and Valverde has 122. But I do not You want to compare. Next to Valverde, I am nothing. I only came here to take off my txapela before him and pay homage to him. «When he heard it, Valverde, who knows who Perurena is, his humility and the affection that everyone has, takes a sip of his green bottle Alhambra and looks down , touch.