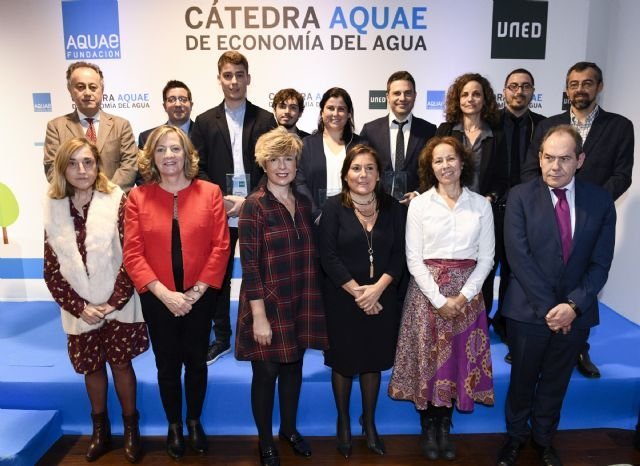 The Aquae Water Economy Chair, the result of collaboration between the National University of Distance Education (UNED) and the Aquae Foundation, the foundation of HIDROGEA, has awarded the V Aquae Water Economy Awards, created in 2014 to assess the better research work carried out around water in Spanish and foreign universities in three modalities (Doctoral Thesis, Master’s Thesis and Final Degree Projects).

In this edition, many of these investigations have focused on the circular economy of water from different perspectives, such as its reuse, its quantification or the policies to promote this economic system. Other research subjects dealt with in these works have been water governance (resource management, implementation of economic instruments or flood management); and water and climate change (mitigation of its effects or adaptation to future scenarios).

«Today is a special day because we also celebrate the V anniversary of these awards and in the world of the ephemeral, speed and change, taking five years demonstrating that research, reflection and analysis are important, I think it is also something to celebrate, «explains Amelia Pérez Zabaleta, director of the Aquae Chair of Water Economics, who reminds us that in this five year period, 67 Doctoral Theses, 36 Master’s Thesis and 30 Final Degree Projects from Spanish, European and European universities have been evaluated. Latin American

The work ‘Economic instruments for the management of water resources in Spain’, carried out by Nazareth María Montilla (Univ. Of Córdoba), has won the first Doctoral Thesis Award Chair Aquae Water Economy 2018, valued at 3,000 euros.

The second prize, awarded with 1,500 euros, went to Antonio López (Univ. Politécnica de Valencia) for his work ‘Methods and tools for evaluation and design of economic instruments for drought management and adaptation to climate change’.

The first Work End of Master Award was received by José Antonio Albaladejo (University of Murcia) for ‘Profitability and models of water allocation in the protected horticulture of the Níjar field (Almería)’; and the first End of Degree Work Award has been for Josep Oriol Bellot (UNED) for his work ‘Recovery of costs in water policy.

The Framework Directive in perspective (2000-2018): Intentions, realities and proposals for the future.

Each of these awards has an economic compensation of 1,500 euros.

The second prizes in the categories of Master’s Thesis and End-of-Grade Work have been for ‘The environmental impact of wastewater treatment.

Analysis of the internalization of environmental costs in Alicante and Comunidad Valenciana ‘by Marcos García (University of Alicante); and for Verónica Velázquez (UNED) for her work ‘Proposed indicators of reuse of wastewater for Hydrological Plans in a circular economy’. Each of these prizes is valued at 1,000 euros.

In the delivery of these awards attendees have been able to participate in the masterclass ‘The use of new technologies in education’ by David Calle, member of the Strategy and Supervision Council of Fundación Aquae. Calle, who last year was on the verge of winning the ‘Nobel of the professors’, is the promoter of Unicoos, the most visited educational channel in Spain.

This year he has published ‘How much do clouds weigh?’ And has received the Award of Excellence from the Community of Madrid. Since its creation in 2013, the Aquae Chair promotes research on sustainable water management through articles, national and international research projects, congresses, conferences, seminars and also through these awards.