The counselor Patricio Valverde announces the tender for the construction works, with a budget of more than 1.7 million and a term of one year. 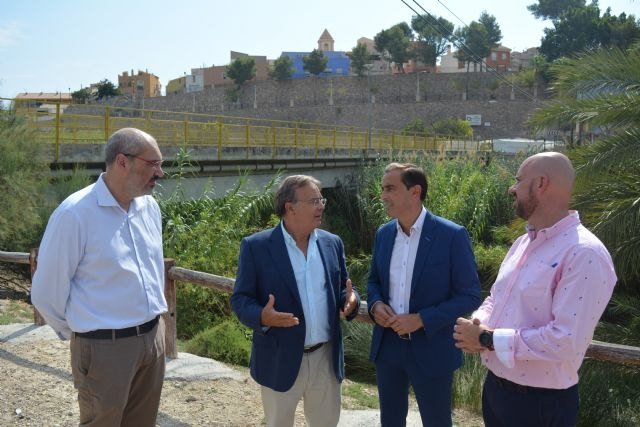 The new bridge to be built on the Segura river on the regional highway RM-B14, which will link the towns of Ulea and Villanueva del Río Segura, will have two lanes to increase road safety for drivers passing through this route and improve circulation.

These works are published today on the web page profile of the contractor of the Community with a budget of the regional government of more than 1.7 million euros and a deadline of one year. Those interested can submit their offers until next September 3.

The Minister of Development and Infrastructure, Patricio Valverde, accompanied by the mayors of Ulea, Víctor Manuel López, and Villanueva del Río Segura, Jesus Mariano Viciana, presented to the neighbors this action, which he described as «essential to increase security and for communications in the heart of the Ricote Valley, especially between Ulea and Villanueva. »

Valverde stressed that this infrastructure serves a «historical claim» of the neighbors and that «it will expand the bridge platform to increase its capacity and resolve the situation of the existing bridge, which does not allow the passage of two vehicles at the same time».

In this way, «the exit and entrance to the historic center of Ulea will be allowed simultaneously, without the need to alternate the traffic directions», explained the counselor.

The works consist in building a new bridge in parallel to the existing one, which will have a width of 10 meters with two lanes of circulation, of 3.50 meters, with two shoulders each 0.50 meters and one meter on each side to increase safety of the drivers.

Its construction forces to modify the layout of the regional highway by means of the execution of two new curves. One of them on the side of Villanueva del Río Segura with a radius of 30 meters and another exit curve of the bridge on the Ulea side, with a 60-meter radius that links to a line that takes advantage of part of the current layout. It will also be necessary to divert a series of sanitation and supply services, such as the Ulea stormwater collector.

The existing bridge will be rehabilitated as a pedestrian walkway so that neighbors can safely cross between the two urban centers. Remodeling and beautification works will be carried out to continue the transit of people between the two riverside promenades located on both banks of the channel.