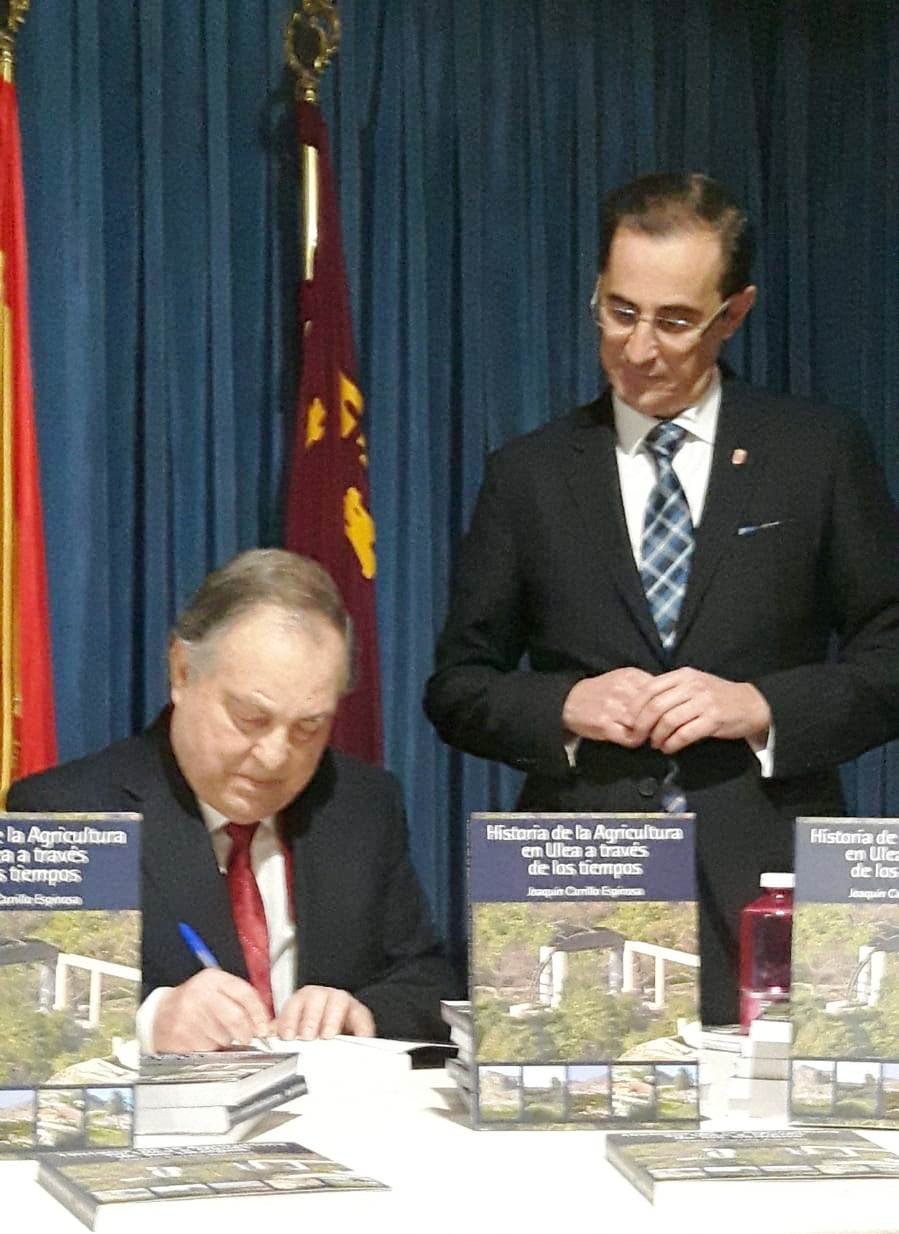 With the presence of numerous neighbors, friends and family, the official chronicler of the Villa de Ulea, Joaquín Carrillo Espinosa, presented his last days at the Cultural Center of Ulea, his latest book: «The agrilutura in Ulea through the times», in which it deals with the evolution of this in the municipality, pointing out the changes suffered over the years.

After the presentation, the author had the deference to sign copies of the book to all those present who requested it.

Joaquín Carrillo Espinosa was born in Ulea in 1938, son of modest parents, and the oldest of 7 brothers.

He studied high school as a free student in the Padre Andrés Manjón de Archena School (Murcia), having to examine himself at the Alfonso X el Sabio de Murcia Institute. While studying he alternated the academic work with the work in the field.

The aspirations in medicine of a young Ulean

After finishing Preuniversitario and Selectivo Common of Sciences in the University of Murcia, he went to Granada, where he would study the medicine career. Also in the Andalusian city he combined the studies with the work of a waiter in a university cafeteria.

During the course of 1960-61 approved the examinations of Internal Student of the Section of Clinics. It is ascribed to the Chair of Obstetrics and Gynecology of the courses 1960-61 and 1961-62. In the following academic year he joined as an intern in opposition to the Chair of Dermatology.

He graduated in Medicine and Surgery at the Faculty of Medicine of Granada in 1963. He held the position of Deputy in the Chair of Obstetrics and Gynecology.

That same year he obtained the position of Medical Doctor of A.P.D., occupying that position in Algamitas in Seville; Aldeire, Alicun de Ortega and Dehesas de Guadix in the province of Granada; and Sax in Alicante.

In 1965 he would become a Diploma in Health. Since 1987 he has been a Medical Doctor at the Santomera Health Center (Murcia). And in 1992 he became a member of the Illustrious Official College of Physicians of Murcia, representing the Rural Physicians. Function that would play until the year 2000.

One of Joaquín Carrillo’s books
Since May 1994, he is a member of the Royal Academy of Medicine and Surgery of Murcia. His investiture speech was about the doctor and literature glossing, as in all his writings, the humanistic facet of which he is credited both in his work and in his writings.

From 1995, he joined the National Association of Medical Writers.

A life for literature and knowledge

At the literary level, he has been, and is, a socio-cultural and health promoter in the press, radio and regional television media.

He has made numerous conferences in university forums, institutes, schools and official institutions.

He is a contributor to scientific articles in medical journals, as well as a columnist on various issues in the press and informative magazines.

He was editor in chief of the magazine of the Official College of Physicians, Asklepiades, from its foundation in 1990 to 1996. He is currently part of the Editorial Board.

He is a founding partner of the Academy of Physicians, Writers and Artists of the Region of Murcia, of which he was president from 1992 to 2000.

He was a writer since always, but he also became an editor when in 1979 he published his first book of narrative, a facet for which he feels a true predilection, entitled «A story of a trip to Peru».

During the years following the publication of his third book he devoted himself to writing articles on Alternative and Natural Medicines, and short stories such as «The Dream of a Weekend».

At the end of 1988 his novel Simply a Woman came to light.

In 1989 he wrote the essays Requiem for a friend and Un beso sublime, and published his work Unfinished Symphony, a true rural epic, of which six editions have been published.

One of his literary dreams appeared in 1994. It is a trilogy entitled Histories of a Rural Doctor that was inaugurated with the book El aprendizaje, currently in its 5th edition. In 1995 the second part is published titled Nuevos hornos, with 4 editions to date. The trilogy ended in 1997 with the launch of Courage, of which 4 editions have been published.

After a two-year hiatus, in 1999 his work Luz en el twpculo came to light, of which 6 editions have been published.

Appointment as Official Chronicler of Ulea

In September 2004, he was proposed to hold the position of Official Chronicler of Ulea. In the heart of the City Council was appointed unanimously. On December 18 of that same year he made the investiture speech in the auditorium of the Cultural Center of Ulea. According to his own words, he performs the job with great enthusiasm, since he has before him the It is necessary to study the History of Ulea, in all its facets, from its origins, and transcribe them so that they are known and / or remembered by all the Uleans.