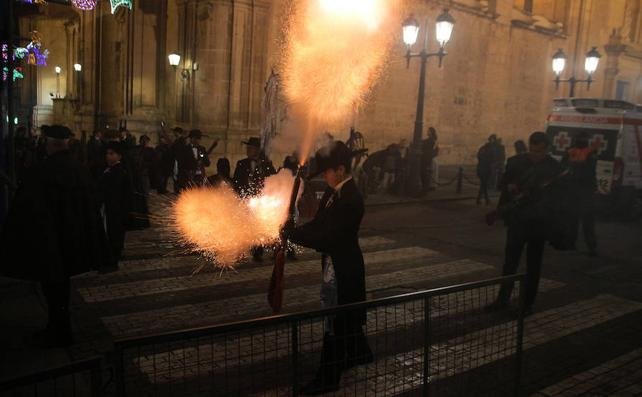 The procession of the Patron, the new appointments and fireworks captivate the public on the big day of the holidays
Source: The Truth

The municipality celebrated yesterday the day of the Immaculate. The image of the Patron was the center of attention of the thousands of neighbors who accompanied the Virgin of the Castle, who was carried on a throne full of flowers that last Friday delivered their own neighbors in the Basilica of La Purisima. The arcabuceros fired again the gunpowder during the tour and concluded the procession with the thunderous coffers closed in the atrium of the Basilica.

The game of the flag began at the beginning of San Francisco street with the Butler making a show of effort to travel a hundred meters without stopping even a single moment of playing with the badge. Sometimes on his feet, others on his knees, Ascensio Martínez won the applause of those who accompanied him on that road to the temple and the love of his family, who joined him in a big hug at the end of the ceremony.

This was the end of a day that began with a Mass organized by the Association of Mayordomos in the Basilica of the Immaculate, which was full of faithful. Later, the company Captain Martin Soriano Zaplana moved to the plaza of Councilman Sebastián Pérez, where the proclamation of the Clavarios this year was made, who will be the Mayordomos of 2019.

Once the groups of squads were formed in the area near the Old Church, began the Clavario del Bastón, José Luis Soriano Morata, to climb slowly while firing the harquebus to reach the height of the president of the Association of Stewards, José Francisco Puche, who officially named him Clavario del Bastón. Very excited, with tears in his eyes, the new Clavario was greeting the members of his squad, Minerva, and the rest of the people who make up the officiality of the celebrations.

In the insignia of the flag, Francisco Martín Azorín Yago was proclaimed Clavario. Subsequently, he received congratulations from the squad to which he belongs, Captain Zaplana, who paraded in the last place of the entire soldiery. From now on, the Clavarios can already be with the Mayordomos and can participate as such in the own acts that will be developed. After the act, in the city of Yecla it smelled of a typical dish that is not lacking in the kitchens every December 8: the stuffing balls.

The courtship of the afternoon
The events of the festivities continued in the afternoon with the traditional procession of the Virgin, which is always a very special act for the neighbors. These, as usual, crowded to the step of the Patroness. In the vicinity of the market of San Cayetano one of the most anticipated moments was lived: the traditional ‘castillico’ of fireworks. Thousands of people gathered in San Jose Street to see in first person this pyrotechnic show that began when the Butler of the Flag finished playing the badge. The circle formed by the public that was crowded in the area was the scene of that short game of the Flag.

Later, the arquebuses thundered harder than ever before the arrival of the delegation to San Francisco Street. The Butler of the Staff, Jorge Ruiz, was uninterrupted firing his arquebuses and flanking the one of the Flag while this one played the insignia going up way of the Basilica, between the firing of the thunderous closed ark.

The night also maintained favorable weather conditions, without the dreaded wind blowing strongly. What allowed the Butler to show off his game to the doors of the Basilica and conclude the day. It is predicted that next Sunday the patronal celebrations with the Ascent of the image of the Virgin of the Castle to his sanctuary will retur