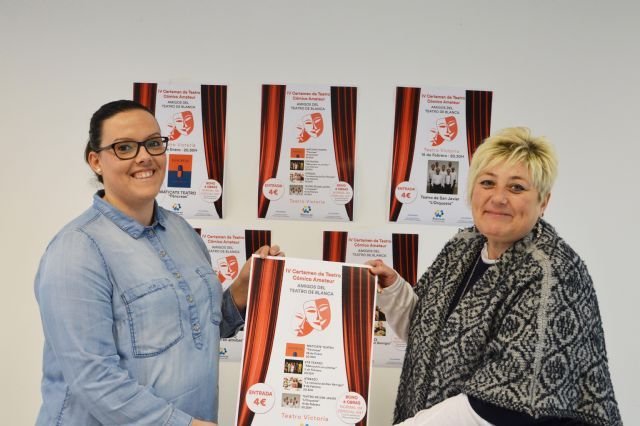 Source: Blanca City Council
Matícate, ETB Teatro, Atrezzo and Teatro de San Javier will be the participants of this fourth edition that takes place at the Victoria Theater from January 26 to February 16
The councilor for Culture, Alba Molina, presented this morning, together with Nieves Huerta, representative of the cultural association Blanca-Anguillara Sabazia, the fourth edition of the Amateur Comic Theater Contest ‘Friends of the Theater’ that takes place on January 26 at February 16 at the Victoria Theater.

This fourth edition, organized by the association Blanca-Anguillara Sabazia in collaboration with the Department of Culture, will have the participation of four groups from the Region of Murcia. Tickets will be priced at 4 euros and, in addition, you can get a bonus for the 4 functions for 12 euros and 10 euros for members of the Association.

The popular contest will open the curtain of the Victoria on January 26 at 8.30 pm with the group Matícate Teatro who will perform the play ‘Pancreas’ under the direction of Manuel de Reyes to represent this tragicomedy of 70 minutes, which tells the story of three friends: one seriously ill, the other suicidal and, the third, «a lianta de noses».

The second to act will be ETB Teatro, on February 2 at 8:30 pm, who will represent the work of Miguel Mihura ‘Peach in syrup’, whose adaptation and direction has again Manuel de Reyes as responsible for it.

The group Atrezzo will be the third to act in the comic contest, with ‘The query of Don Remigio’. A comedy that will host the Victoria Theater on February 9 at 8:30 p.m.

Those in charge of closing the cycle will be the members of the San Javier Theater group that participate in the contest with the play ‘L’orquesta’ on February 16 at 8:30 p.m.

All entries will have an entry fee of 4 euros that can be purchased at the theater box office, one hour before, or by telephone booking at 619 789 969.