The investigation was initiated thanks to citizen collaboration, in this case for an anonymous report filed on the website of the Civil Guard 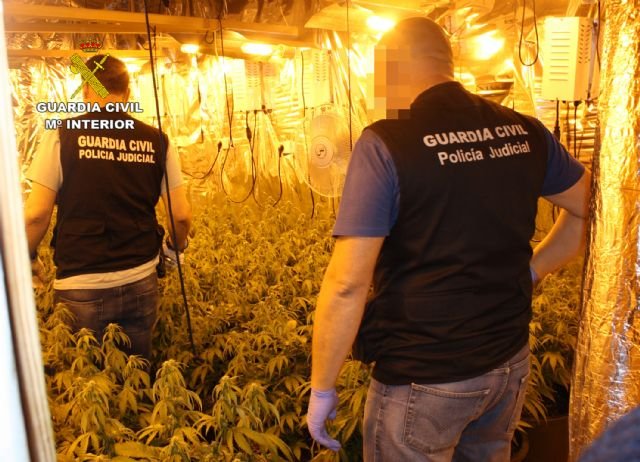 The arrested, who is allegedly responsible for the crimes of drug trafficking and electricity fraud, used an occupied house owned by a bank

A marijuana plantation has been seized, part of this substance in buds and methamphetamine, as well as effects related to drug trafficking

The Civil Guard of the Region of Murcia, thanks to the collaboration of citizens and within the framework of the services established to prevent and prosecute drug trafficking, has developed the operation ‘Favent’, which has resulted in the arrest of a person in Alguazas that ran a point of direct sale of different types of drugs to consumers.

Last September, through the platform of suggestions on the official website of the Civil Guard, anonymously a citizen denounced the existence of a house in Alguazas, whose residents could engage in drug trafficking.

Agents of the Benemérita, specialized in Judicial Police, initiated the investigation to verify the denounced facts and fruit of the first investigations could be located a house in which a person resided that already counted on police antecedents by this type of criminal acts and that had illegally occupied the property, being this property of a bank.

After verifying that the dweller could engage in the retail sale of narcotic substances and obtain all the necessary evidence, with prior judicial authorization, the Civil Guard made the entry and registration in the dwelling object of the investigation during the morning of yesterday.

In the house, the agents found a marijuana plantation with 101 plants, distributed in two indoor type greenhouses in two rooms, several marijuana wrappers in buds totaling 150 grams destined for direct sale to consumers and about 200 grams of methamphetamine. A simulated compressed air pistol and several precision scales were also located.

The plantation possessed everything necessary for the cultivation of this type of narcotic substances, such as sodium lamps, ventilation devices, gases, etc. The researchers also found that all the devices had been illegally connected to the power supply.

The search culminated in the arrest of a person as alleged perpetrator of the crimes of drug trafficking, the manufacture and cultivation of marijuana and the defrauding of electricity

The Spanish detainee, 18 years old and neighbor of Alguazas, the drug seized, the recovered effects and the diligences instructed have been made available to the Court of Instruction of Molina de Segura (Murcia).