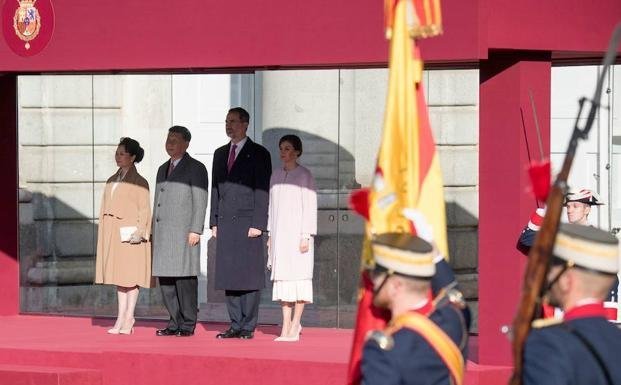 Source: The Truth
The Chinese president signs a score of commercial and cultural agreements with Pedro Sánchez with which Madrid and Beijing seek to relaunch their bilateral relationship.
The first official visit of a Chinese president to Spain in 13 years will leave on Wednesday after a number of economic agreements and an improvement in relations that will be especially important at a time when Europe and the Asian giant are facing each other hand in hand to the commercial war opened by the Trump administration against the rest of the world.

Xi Jinping, who arrived in Madrid on Tuesday, will star in today a busy schedule that, for the time being, has taken him to the Senate and Madrid City Council, and will continue with a working lunch with Pedro Sánchez and will culminate with a gala dinner The Kings will offer in his honor at the Royal Palace.

The Chinese president, who on Monday already broke into praise for Spain in an article published in the media of Vocento, today encouraged Madrid to «climb new steps» in commercial, political and security cooperation.

All this will mean a «mutual benefit,» he said during a speech in the Upper House. This will arrive immediately through the twenty agreements that will be signed this afternoon at the Moncloa. Among them, is the pact to end the double taxation or opening the Spanish grape and pork to a Chinese market that includes 1.4 billion people. Spain will be able to export fresh and frozen meat, ham with bone, palette, loin, sausage and chorizo.

Gallery. Reception of the Kings to the Chinese president.
Chinese interest
Spain is interested in maintaining the best relationship with the Asian giant. But the fact that Xi Jinping has chosen Madrid as a European capital in which to stop during the tour that will take place in Latin America in the coming days also demonstrates the importance that Beijing gives to Spain. The reasons for this being yes are several. The first is that Madrid is one of the European partners with the least competition in China globally. And having an ally in a European Council where decisions are taken unanimously is a treasure. It is the same tactic that you have used, for example, Russia uses with Greece.

China’s second interest in Spain is commercial. With Xi Jinping, the most powerful president of the Asian country since Mao, China has opened definitively to the outside thanks to a market economy that combines with a scrupulous internal control of the individual liberties. The pragmatism of this renewed Communist Party has led him to design a modern Silk Road, in the image and similarity that was created in the first century BC to connect the country with Europe and Africa – and now also Latin America – through of a gigantic plan of maritime and railway routes. They will be highways for which Beijing hopes to extend its merchandise throughout the world and import the products it suffers from. And the moment, with Trump’s United States retreating to its borders, can not be better for the Chinese.

Although the Silk Road is a key issue for the Asian country, it arouses misgivings in the European Union. Also in Spain. And it is that in the old continent, with the exception of Germany, the trade deficit with China is already in itself galloping and it could be even more so if the new communication channels open up.