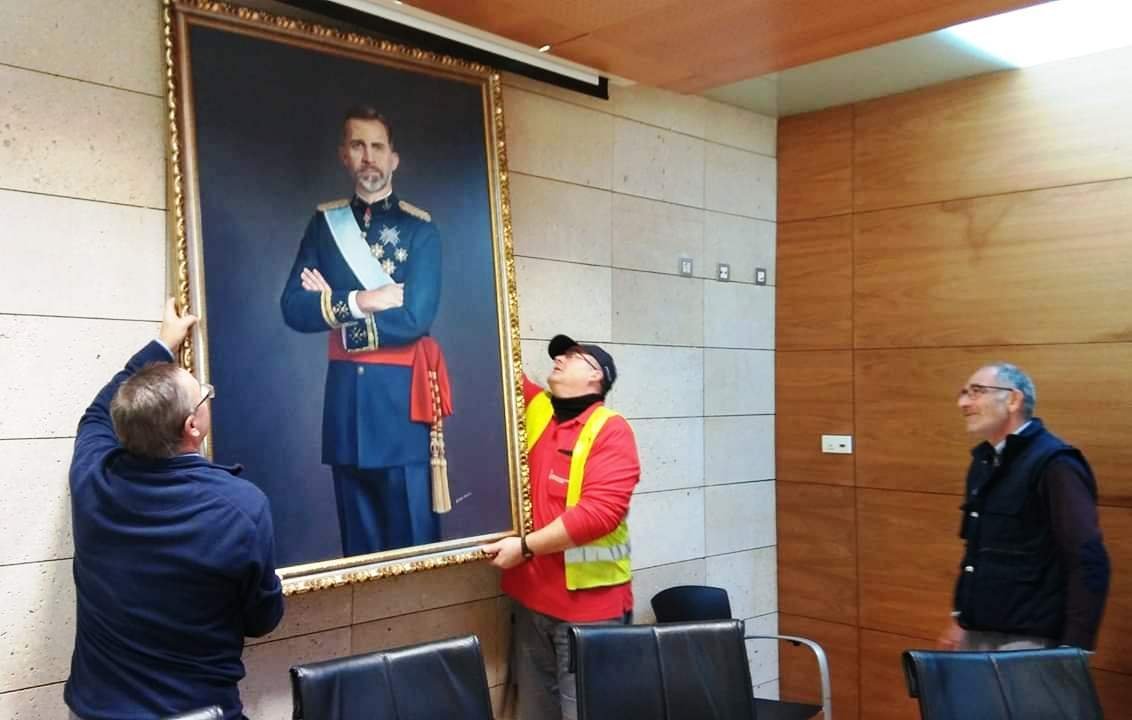 Municipal workers have proceeded today to withdraw, for its appropriate return, the painting of King Felipe VI donated temporarily by a neighbor of Totana, who has remained in the plenary hall of City Hall, institutionally, on the occasion of the celebration of the Centenary of the City 1918-2018

The Local Government Board approved last February to sign a collaboration agreement with the neighbor Francisco José Miras Martínez, member of the Monarchical Union of Spain and virtue which the City would welcome the temporary transfer of the painting of King Philip VI, property of this one, in an outstanding space of reference in the municipal dependencies agreeing with this ephemeris.

The pretense has been to place the painting, whose work is by the painter Antonio Navarro Menchón, throughout the year 2018 so that it could be part of the commemorative activities scheduled in the past year on the occasion of this historic event.

The collaboration agreement established the rules governing the transfer of possession of the painting, its ownership, as well as the return of the same at the beginning of the year 2019, as has occurred.

Totana celebrated the Centennial of the City Title Award in 2018, so the Department of Culture, in collaboration with a commission of experts and under the advice and guidance of the city’s chronicler, Juan Cánovas Mulero, organized a broad and ambitious program of cultural and social activities.

The Mayor, Andrés García, thanked, on behalf of the Municipal Corporation, this kind gesture to Francisco Miras and recalled that this municipal institution has always maintained an attitude of closeness and loyalty to the parliamentary monarchy and the Royal House.

Finally, he has taken the opportunity to congratulate each and every one of the people, associations, groups and entities that have made possible, in an altruistic and disinterested way, the celebration of the list of commemorative events during the year 2018, which has resulted in a success of organization and participation.