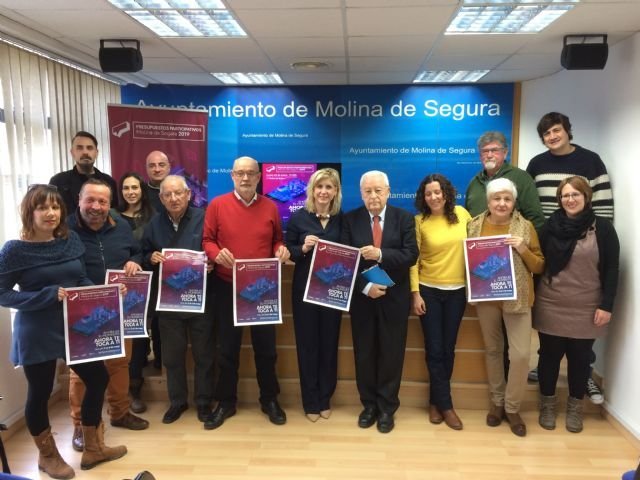 Source: City of Molina de Segura
The vote of the projects by the neighbors will be held in person from May 2-6, and online, from April 16 to May 6, after a process of proposals and selection of the most appropriate
The process, in which the residents of the locality over 16 will be able to participate, will be presented at a public event today, Thursday, January 24, at 7:30 p.m., in the Plenary Hall of the City Council.

The act of presentation of the process of the Participatory Budgets 2019 of the Molina de Segura Town Council will take place today, Thursday, January 24, at 7:30 p.m., in the Plenary Hall of the Town Hall. The Mayor of the town, Esther Clavero Mira, the President of the Council of Transparency of the Region of Murcia, José Molina Molina, the Councilor for Citizen Participation, Pedro Jesús Martínez Baños, and representatives of the five Area Boards and the Federation of Neighborhood Associations Interbarrios.

The process was previously presented at a press conference to the media, today, Thursday, January 24, by the Mayor, Esther Clavero, the President of the Council of Transparency of the Region of Murcia, José Molina Molina, the Councilor for Participation Citizen, Pedro Jesús Martínez Baños, and the representative of Interbarrios, José Antonio Cano Díaz.

The Participatory Budget is a project of the Molina de Segura City Council, initiated at the request of Molinian citizens organized through its associations, which promotes participatory democracy and allows the involvement of those who live in this municipality in the management of the municipal budget through decision making through a democratic procedure (each citizen one vote), about the destination of 2 million euros of the municipal budget for 2020.

WHO AND HOW CAN YOU PARTICIPATE?

They will be able to participate proposing and prioritizing any of the neighbors of Molina de Segura, over 16 years old. They can only participate in the voting phase, whether it is done in person or online, who are registered in the municipal register on the day of the voting. You can participate in any of the phases of the project in person, going to the various assemblies and meetings to be held in the corresponding social center or online, by going to the web page www.decide.molinadesegura.es, where you have to register giving yourself high in the application.

HOW CAN I PARTICIPATE?

Proposals can be made in person at the Proposal Workshops that will take place in neighborhoods, districts or urbanizations, or through the Citizen Participation portal www.decide.molinadesegura.es. It will have to be done explicitly and clearly using the proposal sheet that will be provided both in the workshops and online. The term ends on February 15, 2019.

Proposals for action can be made on all areas of municipal competence, whether it is INVESTMENT or whether it is ACTIVITIES AND PROGRAMS. The proposals may have a scope of municipal or zone action. MUNICIPAL AREAS are those that are not located in a specific territory (for example: renovate, improve or acquire an existing element throughout the city such as street lamps, paper mills, banks, etc.); affecting two or more Zones (for example a bicycle lane.); or that affect elements that are considered relevant for the majority of inhabitants or all (for example: the Villa de Molina Theater, the Company Park, sports facilities, etc.). For the process, a limit of 150,000 euros is established in the cost for each of the actions. Proposals at the municipal level can be both investment and current expenditure of goods or services. AREA AREAS are those whose execution is related to a single area. It must be an exclusively investment proposal (purchase of equipment, new work, or improvement or maintenance of an existing one) and it will be attempted to affect the majority of the neighborhoods that make up each area, for which the limit of 50,000 is established. euros, in order to increase the number of projects, reaching up to 75,000 euros, in case of benefiting three or more neighborhoods, urbanizations or districts.

2) SELECTING THE MOST TIMELY: PRIORITIZING

Of the total of the proposals made, it will be necessary to choose 25 for each of the Zones in which the municipality is divided and 50 for the entire municipality, in order for municipal technicians to report on its viability.

The area scope proposals will be prioritized as follows:

The neighborhood assemblies, which will choose 2 proposals for each one of the assemblies that are elected among those defended in person during the meetings. The Zone Boards will convene as many asam