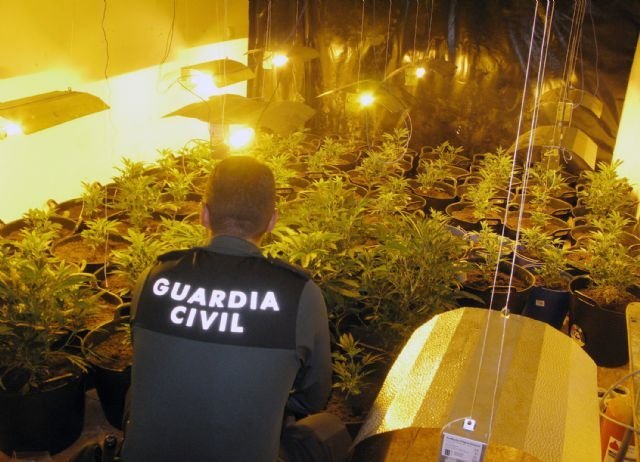 Source: Ministry of the Interior
Two people have been investigated as presumed authors of the crimes of cultivation and elaboration of drugs, and defraudation of electrical fluid
In the registry of the building have seized near 100 plants of cannabis sativa and the necessary tools for its indoor cultivation

The Civil Guard of the Region of Murcia, within the framework of services aimed at preventing and prosecuting drug trafficking, has developed the operation TIRAQ, an investigation that has resulted in the dismantling of a marijuana plantation, indoor type, in an address of Totana illegally occupied by a young couple, which has been investigated by the alleged perpetrator of the crimes of cultivation and manufacture of drugs, and defraudation of electricity.

The house has seized nearly a hundred cannabis sativa plants and the necessary tools for indoor cultivation.

The investigation began in October last year, when the Civil Guard learned, thanks to citizen collaboration, the strong smell of marijuana that several neighbors had perceived when they were in a playground in the municipality of Totana.

This information allowed the Benemérita to begin the search of the place where the odors emanated, with the intention of locating a possible clandestine plantation of marijuana in the area.

The house had several air conditioning units that remained in operation without interruption, the windows remained closed all day and the garage door had been sealed with some type of polyurethane foam.

The numerous surveillance devices, which were subsequently established in the vicinity, allowed to identify the young couple who occupied the house, apparently, illegally.

Daily electricity consumption exceeded up to five times the usual

In addition, the Civil Guard requested the presence of technicians of the electricity company that supplies the area that, after examining the fluid connection, detected the direct intake of current, without contract or counter, with a daily consumption that exceeded up to five times to the usual of any domicile.

Recently, an examination of the property where 96 cannabis sativa plants have been seized in the state of growth, as well as halogen lamps, transformers, air filters and air conditioners, among others, has been carried out.

The operation ‘TIRAQ’ has culminated with the dismantling of a marijuana greenhouse in a Totana house, illegally occupied by a young couple who has been investigated by the alleged perpetrator of the crimes of cultivation and manufacture of drugs, and defraudation of electrical fluid .

The persons investigated were a man and a woman of 22 and 19 years old, both of Spanish nationality, the drugs and the effects seized, as well as the proceedings ordered. They were put at the disposal of the Court of Instruction of Totana (Murcia).