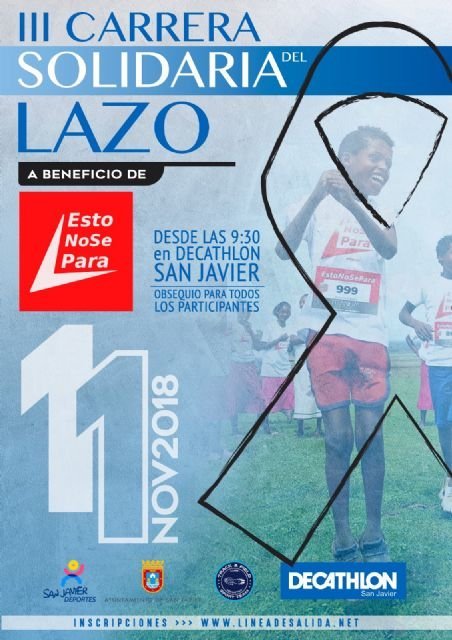 The III Solidarity Race of Lazo, organized by the club «Track And Field Sport Team» with the collaboration of Decathlon San Javier and the City of San Javier, is held on Sunday November 11 in San Javier with a more urban route for the 400 participants that it hopes to gather in this new edition whose proceeds will go to the local humanitarian NGO «Esto no se para».

Councilor for Sports, Estíbaliz Masegosa, the representative of the «Track And Field Sport Team», Juan Antonio Gatón, the director of the Decathlon San Javier, Laura Santos and the president of the NGO «Esto no se para», Moisés Sáez presented this morning at the City Hall of San Javier the race and run test, with a 5km course and a children’s section with races of 200, 550 and 1100 meters.

Juan Antonio Gatón explained that the departure will be at 10am from the San Javier Decathlon esplanade from where he will head for the party tent to the San Javier sports center, turning to the Cuatro Picos roundabout and from there to San Blas. At the height of the center of Colombicultura will turn left to reach the goal located in the back of the party tent in the polygon El Pino, next to the Esplanade of Decathlon, where the 11h will be held the children’s tests.

Registrations can be made until Friday at 5pm at www.lineadesalida.com and if there are numbers on the Decathlon facilities on Saturday from 5 to 8pm and until 9:30 at the starting point of the race. The price will be 5 euros for children, 8 euros for runners and 6 euros for the march. There will also be a Dorsal 0 for 5 euros for those who can not participate and want to contribute jointly.

Moisés Sáez, president of «Esto no se para» thanked the organization for having chosen the NGO that works from the Mar Menor to improve the quality of life of children in Ethiopia. The money raised with the race will be used to build a school canteen that will serve 400 children, explained Moisés Sáez. With the funds they have been able to raise so far, many of them with careers in schools, have been able to provide a water service to a school, build a classroom and get a teacher for children with disabilities, and sponsor homeless children paying their expenses of first necessity.

Councilor for Sports, Estibaliza Masegosa thanked the club «Track And Fields Sport Team» for its involvement both sports and social in the municipality and reiterated the support of its council to this type of initiatives of solidarity. Masegosa also thanked the involvement of Decathlon whose director Laura Santos showed «the honor that Decathlon supposes to participate in this type of events». Along with Juan Antonio Gatón agreed to encourage participation, in a race for all types of public, who will sell 400 numbers, 50 more than in the last edition.