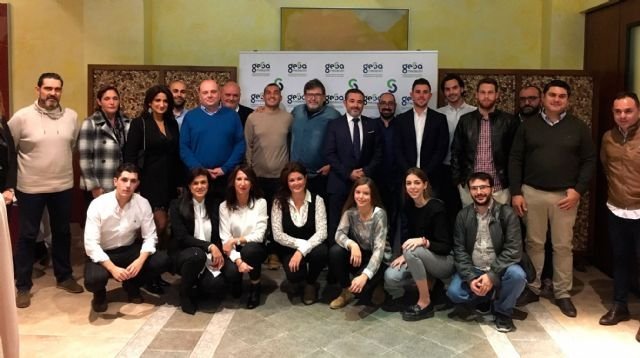 The insurance brokerage firm reaffirms its commitment to sport by sponsoring athletes, clubs and events in football, volleyball, tennis, paddle tennis, sailing, athletics, motorcycling, regional and national
The general director of Gesa Mediation, Mariano Albaladejo, presented all the teams and athletes sponsored by the insurance brokerage, which must be added sporting events, and football clubs, volleyball, tennis, paddle tennis, sailing, athletics and motorcycling competing in regional and national leagues.

«Gesa has been playing sports for more than 20 years, supporting clubs from different sports disciplines, with humble and long-term projects, with well-established teams and athletes and also with those who have a great future,» said Albaladejo, who also highlighted the important commitment to women’s sports, «which is part of the commitment of the company with equal opportunities and the promotion of women in sport.»

The presentation, held at the El Churra restaurant in Murcia, was attended by sports journalists from the Region and some of the representatives of the athletes and sponsored teams, among which were the EDMF Churra, the EMF of Fuente Álamo, the soccer Lorca Females, Murcia Voleyball, Sport Club Montepinar, women’s paddle team, the Murcia Tennis Club with the tennis player Ariana Geerlings and the Carburo de Plata Solidarity Race.

Gesa will also continue to support the upcoming season such popular events as the Carrera de Nonduermas, and the young promise of motorcycling, Fermín Aldeguer.

Outside the Region of Murcia, in those communities and municipalities in which the insurance brokerage has offices, there has also been an important commitment to local football teams, and sports schools, as in the province of Malaga with the Colmenar CF and Casa Bermeja CF, or Huercal Overa CF, in Almería.

«We work with the teams doing quarry, taking care of the athletes since they start, because at Gesa Seguros we like to see them grow in their sporting career,» said Albaladejo.

It is the first team to compete in the Women’s Second Division, which makes it one of the top representatives of regional women’s sport.

Their Football School is the best example of the great work they are doing to expand and strengthen women’s football.

Women’s team, with 40 years of history, has managed to position itself among the best teams in the national league.

In recent years, he has been doing a great job with his bases.

This women’s team was proclaimed last season Regional Champions of the National Series of paddle.

Ariana Geerlings, tennis player of Murcia Tennis Club, scholarship by Gesa, is one of the great hopes of Spanish tennis.

With one of the humblest budgets of the Third Division, has managed to consolidate in the category, reaching to play the playoff promotion to Second Division B last season.

Work, humility and sacrifice are the values ​​that from the bases try to transmit as part of the identity of the club.

In the modality of beach soccer, in cadet category, it has been one of the most nationally awarded teams in recent years.

The Municipal Football School of Fuente Álamo offers the possibility of playing soccer to more than 200 young people in the area.

The first team is firmly committed to local talent. He has been close in recent seasons to fight for the promotion to Preferent, and aspires to continue in this line.

Both clubs are from the province of Málaga, where they compete in regional categories.

We must highlight the work of promoting the sport they play in their respective locations.

Young people of all ages can enjoy football thanks to the existence of these clubs, which also allow them to project themselves towards amateur football through their first teams.

This club, although located in the province of Almeria, competes within the Football Federation of the Region of Murcia.

We are talking about one of the most popular tests of the regional and national calendar.

Fermín Aldeguer, motorcycling, is the latest addition to the sponsorship of Gesa Mediación, from the Spanish quarry of motorcycle riders. It has a very high level with only 13 years.

Be part of the team Bester Capital.

Soon he will make the jump to tests of international relevance that will allow him to show all his abilities.

This club organizes the Charity Race Carburo de Plata, one of the most emblematic and attractive that takes place in the waters of the Region of Murcia