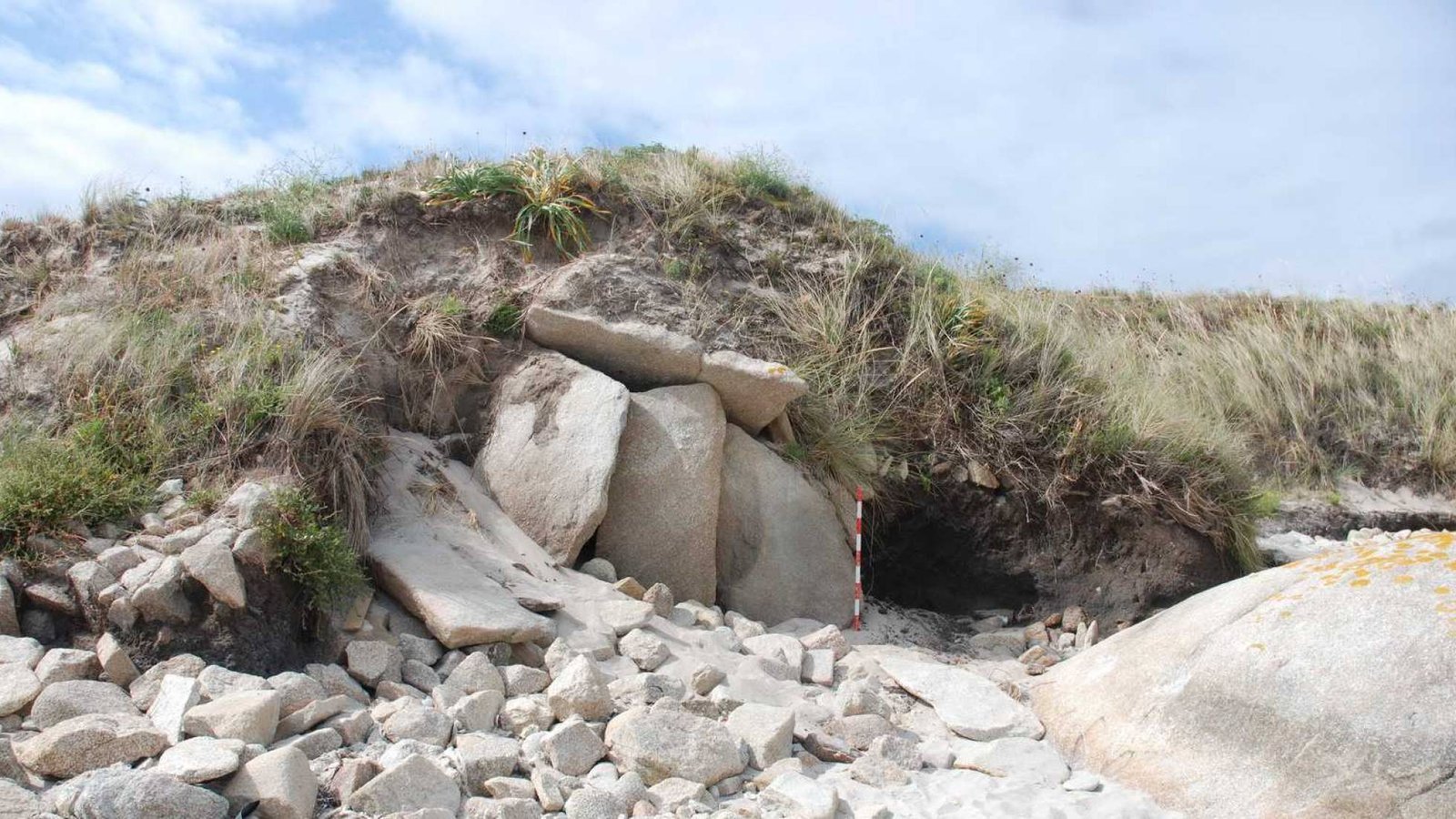 An archaeological apocalypse advances through the Arousa estuary without anything being able to stop it. The Areoso islet, the largest of the two that make up the Rúa archipelago and Os Guidoiros, dies because the water is invading it. Tidal tide. It melts like a sugar in coffee. And with it the archaeological sites that it contains: Neolithic structures (6,000 years before Christ), Bronze Age (4,000) and Iron (2,000). Five dolmens (one already destroyed by the waters), the funeral chambers, the bell-shaped dishes … Everything disappears dragged by the tides. Some objects have been taken to museums or laboratories, because the Ministry of the Environment tried, without success in 2011, to stop the destruction with a wall. But the sea is dragging the sand with more force because of a change in the currents, according to the reports of the professor of Geography at the University of Santiago de Compostela, Ramón Blanco Chao. Patricia Mañana-Borrazás, director of the last excavations that try to study everything before the catastrophe, denounces it. «It’s tremendous. It is a pain in the heart. »

Areoso (600 meters long by 20 wide in its narrowest places and 9 of maximum height) rises a kilometer and a half from the island of Arousa. But about 10,000 years ago it was not like that, it was part of a peninsula that disappeared as the glaciers melted, the temperature increased and the sea level rose between 5 and 7 meters. It is what is known as the geological era of the Holocene.

In search of the boat of the apostle Santiago
The studies on the current hecatomb, which can be consulted on the Guidoiro Dixital page, indicate that «the islet in recent years has undergone an important process of alteration of sandy surfaces. The northern dune has been reduced considerably in height and extent, while the beaches have receded by almost one meter in the last six years. »

Blanco Chao recalls that the insula has always had «a natural pendular movement between 4 and 27 degrees north.» But something happened in the eighties that changed its oscillation: it began to turn towards the east. The destruction began. The studies – in which satellite images and GPS technology have been used – show that the change originated from «anthropomorphic issues [modifications in the orography of the coast caused by humans]» and by the pressure of visitors. «More and more people arrive by boat and cakes the ground,» recalls Blanco Chao.

Comparison of the state of the beach where Mámoa 4 is located between 2007 and 2011. GUIDOIRO DIXITAL

That causes the islet to lose sand and that no replacement contributions arrive from the coast, as it is «like a small mountain» in the middle of the estuary, far from everything. «He needs a management plan that reduces his visitors and allows the replacement of the sand that goes to the sea,» the geologist asks.

The island, despite its small size, has six sites: the Mámoa (from 1 to 5) and another from the Bronze Age. And each one of them keeps a surprise. In Mámoa 1, for example, Professor José Manuel Rey García, found a tomb of 5.80 meters in diameter in the center of which he unearthed a polygonal funerary chamber. In the 2, they found ceramic vessels of the third millennium BC and another sepulchral chamber; in the 3 a dolmen …

Retaining wall to prevent erosion on the islet. GUIDOIRO DIXITAL

In September 2011, the Provincial Coastal Service of Pontevedra of the Ministry of the Environment built a concrete wall to protect the Mámoa 4 deposit from the action of the sea. But two years later, Mámoa 5 was completely destroyed without anyone being able to prevent it. It was a tumulus that kept a megalithic camera.

Not only in Prehistory the islet was a place of funeral occupation. Neolithic and Bronze Age inhabitants also lived there. In fact, 4,000 pottery fragments, animal bones and shells belonging to extinct species have appeared, since the islet had a settlement between 2225 and 1950 BC. It has unearthed bell-shaped pottery and burned pots on its surface, which shows that they were put on fire.

During the last excavation (Mámoa 4) archaeological objects that were surfacing due to the erosion of the sea have been recovered, taking special care to correctly register their context, the stratigraphic unit in which they appeared, their three-dimensional location and even the position. In the laboratories, the treatment of archaeological materials, their cataloging and inventory has been carried out. Much of the material unearthed-some 4,000 large ceramic fragments and another 1,000 tiny-are being transferred to the Museum of Pontevedra,