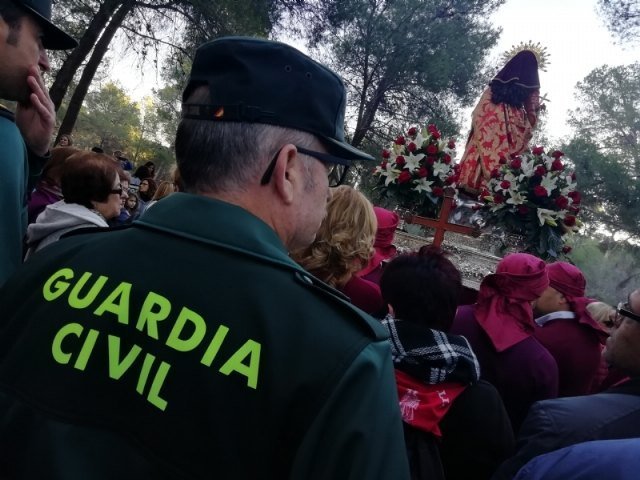 More than fifty troops are part of the security and emergency plan for the return pilgrimage of Santa Eulalia de Mérida, patron saint of Totana, in which thousands of people will participate on Monday, January 7. The image of the patron saint of Totana will depart from the church of Santiago Apóstol, where she stayed during the month of December, to her sanctuary.

The MU-502 road that connects the towns of Totana and Aledo will be cut off to traffic during the morning of Saturday from 8:00 am, and will be closed to the circulation of vehicle vehicles until approximately noon, opening the road traffic once the Santa Eulalia has arrived at the Sanctuary.

The security device and the planned emergency plan, and that will ensure that the transfer of the image of La Santa develops normally, was agreed at the last local citizen security meeting held on November 20.

A professional human team of more than 50 personnel will be present, formed by agents of the Local Police, Civil Guard of the Totana Post, Traffic Association and the Nature Protection Service (SEPRONA) of the Civil Guard, Volunteers of Protection Civil, members of the fire station of Alhama-Totana, and environmental agents.

The MU-502 road will be closed to traffic at 8:00 am at the height of the Cross of the Mission and the Roundabout Rulo (which connects with the North Beltway), in the first section of the mentioned MU- 502 This will open to traffic once the image of Santa Eulalia arrives at its sanctuary and the agents responsible for the traffic prove that the situation of this road allows it. Therefore, vehicles wishing to access the Sanctuary should do so by the new road of La Santa, which will be enabled only as access road.

For the closure of traffic on this road as well as cash to be safe, the intermediate accesses to the MU-502 road will be cut off to traffic, for which the citizens’ collaboration is requested, so that traffic signs to the road are respected. height of the transfer, urbanization «La Charca» and other important access roads; and only the new road of La Santa is used, through which the chapel is accessed through the Sopanvino area.

Similarly, Agents of the Traffic Association of the Civil Guard, will also cut the Aledo-Totana road at the height of El Jumero. The zones enabled for public parking are those usually existing in the sanctuary; and when these are completed, others will be occupied in the Sopanvino area and next to the Aledo dump.

From the Local Police is requested the collaboration of the neighbors so that, at the time of parking their vehicles, do so avoiding the inconvenience to other road users (pedestrians and other vehicles), and trying not to hinder the departure of others parked vehicles.

The City of Totana has received permission from the Directorate General of the Natural Environment for the use of fires for the preparation of typical dishes coinciding with the pilgrimage, with certain limitations and precautions and following the technical recommendations, from 0:00 to 22:00 : 00 hours, according to the Councilor for the Environment, Antonia Camacho.

The use of vegetable and gaseous fuel has been authorized for the lighting of fires, taking place in recreational areas where there are fixed and permanent infrastructures specially enabled for this purpose.