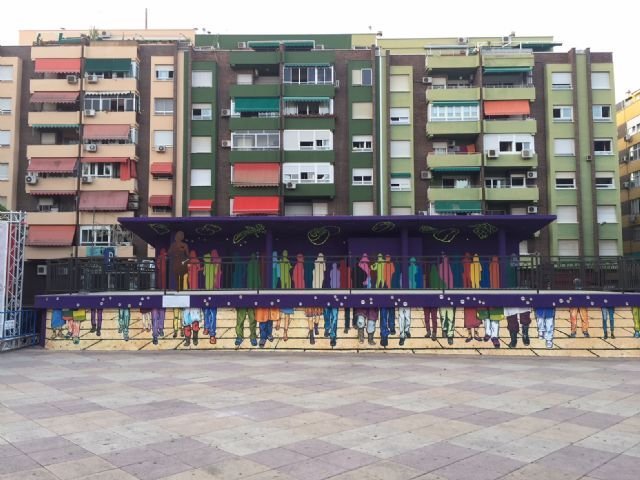 The opening ceremony of the Estrellas en Conserva artistic installation. Tribute to the women of the Conserve de Molina de Segura, created by Colectivo Cuatro and located on the stage of the Plaza de España, took place yesterday, Monday, September 3. Attending the Mayor of the town, Esther Clavero Mira, and councilors of the Municipal Corporation. During the event, images of the creative process were projected, and a performance by the Horizontes Association took place.

Canned stars is a tribute to the workers of the canning factories of Molina de Segura who, with their effort and sacrifice from the sixties of the last century, promoted the economic and social development of the people.

The wall paintings show, in the first place, the legs of the canning women, former workers and / or retired people who walked forward, contributing to improve the quality of life of those who remain in the background, citizenship.

The two feminine sculptures symbolize the open dialogue between those workers whose heart oppressed by the preserved at the same time was proud of everything related to it. The work invites us to position ourselves on the traces of women, and adopt for a moment the complex perspective that it housed in them.

The lighting design represents constellations of fruits and vegetables that, really, were conserved. And at the same time it is an allegory that places the protagonists, mostly deceased without public recognition, as stars of a part of the history of Molina de Segura.

This artistic project has been carried out by Colectivo Cuatro, with the support of the Molina de Segura City Council, la Caixa, Lumitel, Domiberia and all those people who have collaborated with their support during the process.