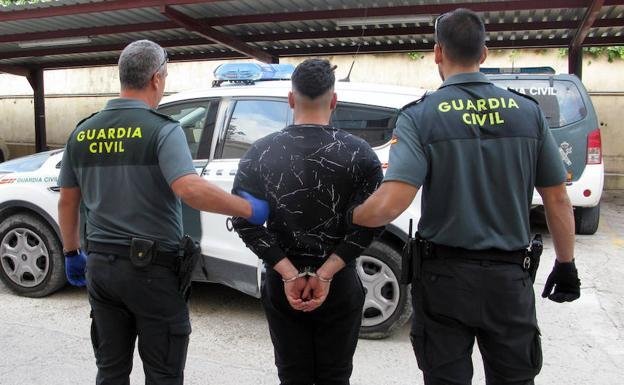 THE TRUTH / J. G. B. / A. G.Murcia
Friday, October 19 2018, 14:54
The Civil Guard of the Region of Murcia has developed the operation ‘Maripinar’, an investigation that has resulted in the arrest, ‘in fraganti’, of the five members of a criminal group, based in Molina de Segura and Ceuta, to which the alleged authorship of the crimes of robbery with force, damages and belonging to a criminal organization is attributed to him.

La Benemérita has clarified a dozen crimes committed in shops in the municipalities of Murcia Cieza, Abarán, Archena, as well as Medina del Campo, Valladolid.

The investigation began last June with the aim of identifying, locating and arresting the perpetrators of several robberies committed in commercial establishments, located in isolated areas and industrial estates of the municipality of Cieza.

The first investigations allowed to verify that the ‘modus operandi’ used to access the premises presented a common pattern, which made the agents suspect the participation of several people who, in an organized way, assaulted the establishments to seize the collection of Recreational machines and the cash register.

The Civil Guard ordered numerous surveillance devices, aimed at preventing further thefts, and others of discreet surveillance in the affected areas, with the intention of locating the suspects.

Criminal group of itinerant character
The investigations carried out have made it possible to find out that this is an organized, itinerant criminal group with extensive experience in the criminal world, which distributed its criminal tasks in such a way that, while two of them were in charge of transferring the rest to the proximity of its objective and to hide the vehicle in a safe place to guarantee the escape, the rest materialized the assault.

For this, one of the three remained in the vicinity to warn of the presence of police or witnesses and was responsible for notifying the drivers when the robbery had been consummated.

The assailants did not hesitate to use the forcefulness of tools capable of bursting recreational machines, tobacco and cash registers in order to seize the money.

The value of the stolen money and the damage caused is around 30,000 euros. The Civil Guard has seized a vehicle and tools, and has recovered 405 euros, supposedly, from thefts.

Arrested ‘in fraganti’ after assaulting a bar in the polygon Los Prados de Cieza
They forced the security blind of the entrance door of a restaurant in Cieza and once inside the premises they used a hammer to hit the cash register and take it away. This robbery with force took place about two in the morning of this Thursday and the assailants, four Romanians and one Spaniard, fled at full speed of the hotel establishment with a booty in cash of 430 euros. The reaction of the Civil Guard and the Local Police could not be more effective, since hours after this coup their authors were arrested.

In the restaurant several patrols of the Benemérita and the Local Police appeared and verified that the robbery with force had just perpetrated. The agents of the Armed Institute based in Cieza envisioned the establishment’s security cameras, which, according to sources close to the investigation, allowed them to «obtain valuable information» about the authors of the suit. In fact, they were located in the vicinity of the municipality of Abarán where they proceeded to arrest him.

One of the four Romanians arrested is a minor. The fifth arrested is Spanish. All the detainees, aged between 18 and 36 years, have already been placed at the disposal of the Court of Instruction on duty of Molina de Segura. The Office of the Prosecutor for Minors has been informed of the intervention of a minor in this robbery committed with force.